Dramatically rising sea level is one of the Big Scares pushed at children to get them suitably conditioned about the C in CAGW (catastrophic anthropogenic global warming).  The cause is of course put down to the presumed dramatic effects of rising CO2 levels in the 2nd half of the 20th century, and their continued rise expected in the 21st.

These rises are held, by some, to be causing extraordinary rises in global mean temperature, as repeatedly implied for example by the IPCC's extensive use of the notorious Hockey Stick Plot in and around their 2001 AR3 report.   (For details of the sloppy nature of the work that produced this plot, and of the conniving that brought it to prominence, see 'The Hockey Stick Illusion'.)

But today, let us look at two other graphics recently highlighted at WUWT that could encourage both children and adults to develop a calmer perspective on climate change, and to be more more alert to the grossly irresponsible scaremongering that can be so readily found in this area.

(1) Our first graphic is a teaser. There was an overall rise in estimated global mean temperature in the 20th century, but the rising phase in the first half was remarkably similar in size and duration to that in the second half.  Cutting and pasting these phases to show them side by side on the same scale makes this quite clear, and is shown below.  In one we are told that 'natural causes' can account for the rise.  In the other we are told that only rising CO2 levels can explain it.  The observer is invited to guess which one is which: Source: this graphic is presented here: http://wattsupwiththat.com/2013/08/20/when-somebody-hits-you-with-that-new-ipcc-is-95-certain-talking-point-show-them-this/#more-91971 . (The C3 site also has many relevant plots, including one used in an earlier post on Climate Lessons.) (Note added 18 Sep 2013: the graphic is due to Richard Lindzen, Journal of American Physicians and Surgeons Volume 18 Number 3 Fall 2013)

(2) Our second graphic is also a teaser, but of a different kind.  The observer is invited to speculate as to the intentions of those who prepared it and of those who authorised it for use on the cover of the September 2013 issue of National Geographic magazine.  What were they thinking?  Do they want to frighten us by any chance?  Do they presume we are innumerate?  Do they think that most of us will fail to check it out?  Was it a grossly irresponsible action on their part to publish it?  What kind of standards do they have?  And so on: 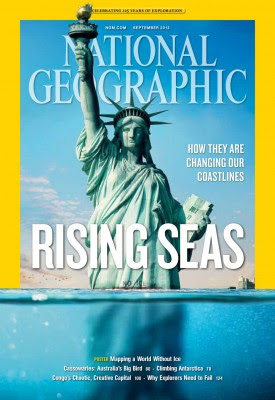 Anthony Watts estimates the water height shown is about 214 feet above mean sea level.  There is a sea-level measuring station nearby showing that sea level there has been rising at a pretty steady 0.0091 feet per year over the last 150 years or so:


He drily notes that at that rate, it will take about 23,500 years to reach the water height shown.

But what about projected rates for the oceans overall?  What does the IPCC say?   Their projections from the AR4 report in 2007 show between 20cm and 50cm rise in the 21stC.  Let us once again do a naive projection of that into the future to see what kind of time we'd have to wait before the waters were reaching towards the waistline of the statue: 2,720 to 1,090 years if the local sea level there changed at those global rates..

Sea level is a surprisingly difficult thing to define and measure, but one thing is clear - we are not competent to forecast reliably its behaviour over anything like these timescales of a thousand years or more.   One recent study by one of the world's leading experts suggests that 'Best estimates for future sea level changes up to the year 2100 are in the range of +5 cm ±15 cm.'  Note well that this range includes both zero, and sea level decreases.  He is not sure that there will even be a rise.

The National Geographic cover is therefore nothing but an extremely wild, and extremely implausible speculation.  As Watts notes at the end of his post on this:

'It is this sort of junk science sensationalism that causes me and many others not to subscribe to National Geographic anymore. '

Teachers everywhere should be on the lookout for such 'junk science sensationalism' in the teaching materials they are being asked to use on climate.  Please also consider sending me details of any examples that you find if you would like them to be recorded here. 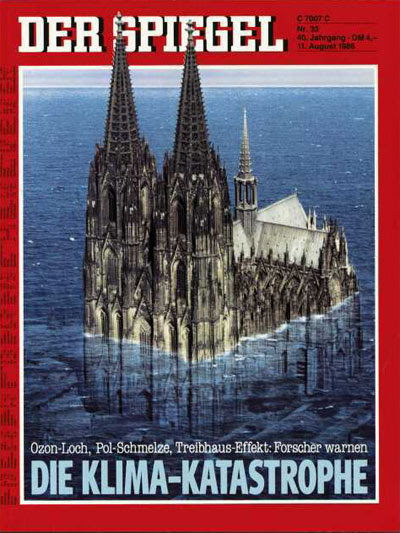 Note added 22 August 2013.  The NoTricksZone blog notes the ignorance and stupidity of the National Geographic cover, and recalls Der Spiegel doing something similar 27 years ago.They note that since then, some sense has got through to the editors of that magazine: 'Spiegel has long since cranked back its global warming alarmism, and even occasionally publishes articles critical of climate alarmism claiming even 1 meter of sea level rise by 2100.'
See: http://notrickszone.com/2013/08/22/national-geographic-scores-own-goal-pathetically-rehashes-27-year-old-spiegel-cover-hyperbole-trick/

Note added 25 September 2013.  Don Easterbrook has examined more assertions in the despicable article behind that despicable picture in the National Geographic.  He concludes 'Summary of conclusions: From the evidence presented above, the obvious conclusion is that the National Geographic article is an absurd fairytale, completely unsupported by any real scientific data and directly contrary to a mountain of contrary evidence.' http://wattsupwiththat.com/2013/09/25/national-geographic-rising-sea-level-prophecycause-for-concern-or-absurd-fairytale/
Posted by JS at 11:34

It is this sort of junk science sensationalism that causes me and many others not to subscribe to National Geographichttp://www.yahafashion.net/

Thanks, lapogus! That was a bad one.

The world's respected scientific institutions disagree with the creators of this blog. Humans are warming the earth mainly with our carbon emissions and deforestation. The consequences are not good. ExhaustingHabitability.com

And here's a little something I found about Tom Harris, executive director of ICSC.

I certainly disagree with the leadership of many scientific institutions about climate. I do not know the extent of possible disagreement with their memberships however, since their views have never been adequately assessed.

I am also a great admirer of the work of Tom Harris. Furthermore I look with deep dismay on the work of Suzuki and Littlemore whom you reference without giving a reference to where their purported comments may be found. Here is some background on Tom Harris from the ICSC site: 'Mr. Harris has 30 years experience as a mechanical engineer/project manager, science and technology communications professional, technical trainer and S&T advisor to a former Opposition Senior Environment Critic in Canada’s Parliament. For the past 14 years he has been working with a team of scientists and engineers to promote a sensible approach to range of energy and environmental topics, climate change in particular. Here is a short video excerpt from one of his many public presentations.
Mr. Harris is regularly published in newspapers in Canada and the U.S. and occasionally in Australia, New Zealand, the U.K. and other countries. He is often interviewed on radio and occasionally TV. Mr. Harris is past Executive Director of the Natural Resources Stewardship Project.' The site itself is well worth visiting: http://www.climatescienceinternational.org/