A Case Study of Climate Corruption: tracking the trash to source


Here is a compact case study of how junk information on climate is produced by a vested interest to suit its own ends and taken up by others for theirs.  How easy would it be for this to get into a school textbook?  Is it just a matter of time?

Willis Eschenbach spotted this claim in a book review in the South China Post:

“Guzman ... cites an estimate that the annual global death toll already sparked by climate change is 300,000.”

Note the alarmism in the book’s cover.  A sure sign of trash to come when the book is about climate.

The reviewer is not totally bowled over, managing this in an otherwise gushing review:

“One possible peeve is that he lashes climate deniers for lacking expertise when he himself is a Berkeley, California, legal scholar. An unkind critic might say that is rich, even hypocritical.”

Eschenbach describes how he decided to try to track down the source of this claim of 300,000 deaths each year due to ‘climate change’.

He finds that Guzman refers the claim to Kofi Annan, and follows that through to find that Annan has his own foundation in place, a foundation that produced a report in which the statistic was used:

“Finally, on page 9, we find the following explanation of where they get the three hundred thousand deaths number:

'This estimate is derived by attributing a 40 percent proportion of the increase in the number of weather-related disasters from 1980 to current to climate change.'

Now wait just one cotton-pickin’ minute right there. They are saying that the three hundred thousand is only forty percent of the increase in people killed annually by the weather since 1980?”

As Eschenbach immediately notes, “That’s hogwash”, and he goes on to explain why.

Further into the report, he discovers an organisation notorious for climate alarmism, Munich Re:

“So just what is Kofi Annan’s pet foundation using as their authority for the 40% claim and the other numbers? Further reading brings us to this one (emphasis mine):

'The 40 percent proportion is based on an analysis of data provided by Munich Re on the past trend of weather-related disasters, as compared to geophysical (i.e. non climate change related) disasters over time.5 It compares well to a 2009 scientific estimate of the attribution of climate change to droughts.11 It is assumed that the 40 percent increase due to climate change based on frequency of disasters can be applied as an approximation for the number of people seriously affected and deaths.'

Munich Re??? They got their numbers from Munich Re? They’re trusting a dang insurance company? That’s what we find way down at the bottom of the edifice of bogus claims? An insurance company that makes more money if people are very, very afraid.”

Eschenbach is rightly shocked.  He goes on to summarise:

"• Munich Re pulled some hugely improbable climate death numbers out of their corporate fundamental orifice, numbers that are clearly designed to help them sell insurance. They have no relationship to reality.

• These bogus numbers were then swallowed hook, line and sinker, and regurgitated in a report issued by Kofi Annan’s pet foundation.

• The report was then quoted by Kofi Annan.

• Kofi Annan was then quoted by Guzman

• Guzman was then quoted by the South China Morning Post.

And there we have the impeccable pedigree and provenance of the claim of 300,000 dead from climate change every year … garbage top to bottom.”

Well done Willis Eschenbach.  He has exposed a piece of irresponsible nonsense that may yet appear in school textbooks in years to come.  Teachers may like to emulate Eschenbach by tracking back from the most scary claims about climate in their current textbooks.  Or give these as project tasks to their more able pupils.  They might learn something about climate corruption that could help protect them from further propaganda.

Meantime, we can all be on the look-out for that 300k surfacing again.

Correcting the Climate Curriculum for Schools: accentuate the positive on CO2

The facile labelling of rising CO2 levels as an imminent threat to our wellbeing is the basis of a great deal of scaremongering, including in materials aimed at children.  The swing to alarmism has been dramatic and will be corrected in due course as the climate system continues to behave as if the rising CO2 does not matter very much.  Just as you might expect for a trace gas which is a minor contributor to the atmospheric heat engine as it occupies itself with transferring heat to the poles each day. 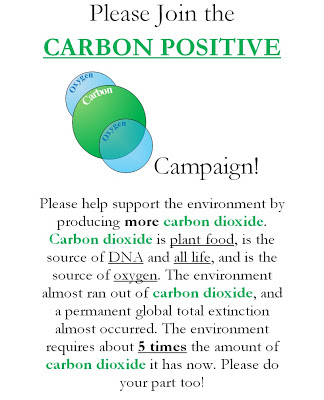 Here is a new campaign which does indeed look on the bright side as far as CO2 is concerned - the Carbon Positive Campaign (hat-tip Greenie Watch).

I must say this appeals to me as a powerful counter to the relentless alarmism that has contaminated our mass media, our political affairs, and indeed educational materials and events for children.

The campaign comes from here: http://climateofsophistry.com/2013/02/12/carbon-positive-campaign/, and I will reproduce that post below.  As and when an outstanding curriculum on climate for schools is constructed, it will in my view include elements of this.

Within 50 years, in the time of our children and grand-children, we will have improved the environment and created a lush, green, productive, life-filled planet Earth with all of the beneficial green plant food carbon dioxide we are re-adding and giving back to the environment.

The carbon that is currently trapped in hydrocarbon fuels used to be life!  It used to be carbon circulating in the global biospheric process of life, and sustained a lush, green planet, that could support huge creatures like dinosaurs in the past.  Today, that carbon-based life has been trapped underground and has formed hydrocarbon fuels that humans can access.  Humans get to use that old carbon, which has turned into hydrocarbon fuel, for benefiting our standard of life and relieving poverty on a global scale, and enriching human livelihood in general with the energy it provides.  That hydrocarbon fuel has supported a tremendous and enriching transformation and development of human society in the last hundred years.

For the last few millions years, the carbon dioxide concentration in the air was getting so low that plant life was almost ready to stop being able to perform photosynthesis!  This would have spelled the extinction of almost all life on the planet, and this extinction would have been global and possibly permanent!  It was a very close call.  Luckily, by the grace of God, evolution, Gaia, or whatever you would like to believe – even convenient and lucky happenstance – humans came along at just the right geological time-period to return that trapped life, carbon, back into the atmosphere as carbon dioxide where it can then turn back into plants and sustain new and more life.  Isn’t it amazing?

It is the most wonderful win-win situation that nature could have provided for us.  We get cheap, beneficial, life-enriching energy, and the environment gets back its own source of fuel.  It is exactly like how animals and humans breathe out carbon dioxide, and then plants turn around and breathe it in as food, and then produce oxygen for us to breath again.  The circle of life.  Except now, we’ve industrialized that process and are returning much more food back to the environment where it is supposed to be, and where it can do some good in creating new life.  We’re giving back the breathe of life by using hydrocarbons and giving carbon dioxide back to the atmosphere, and this new carbon dioxide can now go back into real, living life, in the present and future.

We can use this wealth supplied by hydrocarbons and the time it gives us to develop new, future-oriented sources of power such as advanced nuclear, fusion, and whatever power generation technology science might invent, because eventually hydrocarbon fuels may become too limited to provide the energy requirements we desire.  And when we get to that point, we will be able to always look back and think of all the good that we did for the environment by reinvigorating it with its own carbon dioxide – carbon that had been trapped away from its use in creating and being life.

Please help spread the word of this fantastic news and fantastic science!

The author of this is Joseph Postma, and he provides some background on his thinking in the About section of his blog.  Here is an extract:

'I got interested in the climate science debate because I used to believe in anthropogenic global warming and climate change.  I naturally enjoy debate and independent learning and so I wanted to understand the science of global warming, so that I could communicate and debate against “deniers” more knowledgeably.  However, I experienced one of the greatest shocks and re-evaluations of my world-view when I discovered that the science which underlies global warming and anthropogenic climate change isn’t good science at all, but it is better described merely as the appearance of doing science.  Ultimately, I have scientifically concluded that global warming is an invented scheme for political control via manufactured politics using manufactured science, blaming everything on carbon dioxide which is actually the greenest and most environmentally-friendly gas there is.  My research on climate (pseudo) science has actually uncovered a very humorous irony: the true “deniers” and “flat earthers” in the climate change debate are the people who believe in the greenhouse effect!  They’re the people who deny that the climate changes naturally without humans, and that it changes at rates and magnitudes far greater than we are experiencing in modern times!  This has all been proven scientifically and all of the science actually proves that modern changes are rather benign and unimportant, but the alarmist and greenie ideologues continue to deny the science, and they have billions of dollars of charity money from oil companies and environmental organizations to continue to publicize their political reinterpretation (i.e. invention) of the actual scientific results.'
Posted by JS at 10:26 No comments: