Evil is as evil does: developing ways to strike eco-terror into children

There are lots of examples in this blog alone of deliberate efforts to scare children about our supposed impact on climate and the environment in general.  Here is one which as far as I know was never deployed widely (but it was, for example, used in a primary school in Las Vegas in 2013), but it nevertheless won an 'NNSA award' for its instigator.  That's the National Nuclear Security Administration -see https://www.energy.gov/nnsa/about-nnsa.  Who knew they were on the eco-alarm bandwagon?  Why, I wonder?  What was in it for them?  Looking good to their government masters I suppose by aping and abetting the 'sustainability aka eco-alarm' fad.  Bit of a sideshow for an agency charged with looking after nuclear weapons, but there you go, that's politics for you. 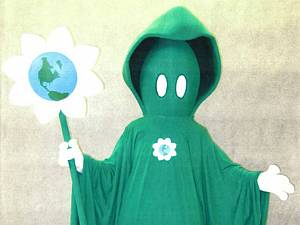 There it is, on the left, the 'Green-Reaper'.


Eric Boehm describes it all very neatly in his article on the Reason site two days ago:

Thanks to a FOIA request from journalist Emma Best, the details of which were published this week at Muckrock, we now know a bit more about the history of the Green Reaper—a verdant version of the Grim Reaper that manages to combine the ominous presence of the original with the vacant eyes of a cartoon character. While the mascot seems best suited to shatter children's innocence by informing them about the inevitabilty of their own deaths, the documents show that the Green Reaper, which was designed in 2012, was intended to be used in "community outreach presentations to local elementary school children" and in internal memos reminding government workers to conserve energy and carpool when possible.
One of the most terrifying details in the FOIA'd documents is the claim that—in addition to making appearences at schools—the Green Reaper shows up "randomly" at the National Nuclear Security Administration (NNSA). Um, no thank you.
The Green Reaper costume cost about $5,000 to manufacture, but the documents provided to Muckrock don't give a full accounting of how much time public employees spent brainstorming and designing it. Regardless, the government liked the design so much that Dawn Starett, the program manager who invented the Green Reaper, won a 2013 Environmental Stewardship Award from the NNSA for it.


...'
Hat-tip: Glenn Reynolds  who provided this link to a piece by Ann Althouse:
https://althouse.blogspot.com/2019/01/the-green-reaper-mascot-department-of.html

Details of the FOIA request that uncovered this 'piece of work' are here: https://www.muckrock.com/foi/united-states-of-america-10/green-reaper-53571/

Note added 25 Mar 2019.  A video highlighting the Green Reaper, and going to look at climate anxieties, and climate scare propaganda aimed at children:  https://www.youtube.com/watch?v=rsXIxk5fBfo
Posted by JS at 11:14 No comments: