Merry Christmas and a Happy New Year to all my readers! 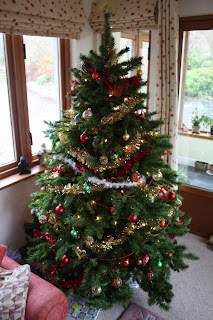 I have not been able to keep up a regular flow of posts here, and I want to apologise for that to any regular readers.  But I hope that the links I provide to more active, and more important, sites (on the right hand side of this screen) will be convenient.  I also hope that some of the posts already made will still be of value for a bit longer, and that also the reference 'pages' I provide will prove helpful from time to time.

I have been building up notes for a series of posts I plan to make next month on the ongoing targeting of children to create activists driven by climate alarm, or to get to their parents to help sustain that alarm.  While the scientific case for such alarm continues to be exposed more widely as being a weak one, and while more politicians seem to making tentative first steps away from domination by environmentalism, there is in the background so to speak, a relentless pushing of alarm or some version of responsibility for doing something about it on to school children.  I suppose that will take decades to reverse and to repair some of the harm caused, and so a delayed posting on a very minor blog will not make a noticeable difference to that.

I am signing off now for Christmas.  I do not have any religious faith, but I do admire the Christian religion for its high ideals, and its open compassion and generosity to all.  I am quite content that they have taken over the pagan festival of this time of year - their music, their sentiments, their actions all enhance it as far as I have found.  Merry Christmas!

Next post some time early in January.  A good deal of progress was made in 2012 on pushing against the promotion of belief in CAGW.  That alarmism is still the 'establishment' view, but surely there are signs that this particular 'tide in the affairs of man' is on the turn.  The 'catastrophism' at least may be being tempered.  Let us hope so.  Happy New Year!

Note added 26 December 2012.  Here is a timely illustration of Christian compassion applied to all those who have harmed the world for decades past and no doubt decades to come with their irresponsible and sometimes ugly scaremongering over carbon dioxide:
'However vicious and cruel the true-believers in the global-warming fantasy have been to those few of us who have dared publicly to question their credo that has now been so thoroughly discredited by events, we should make sure that the rat-hole we dig for their escape from their lavish folly is as commodious as possible.'  Christopher Monckton