Green Bullies: frightening children is what they do

Is there any precedent for the childhood sacrifice being imposed on children by green fanatics?  Some are intent on spreading depression and dismay on to them while they are still at school.  Not only do they mislead them about the state of the world and of science, they also spread alarm.  If they are successful, this is what they will produce: ill-informed,  frightened children with dismal views of the future.  Ideal supporters-to-be for green causes on the one hand, but damaged victims of hyperbole and facile scaremongering on the other.


Here is a recent example from Australia (hat-tip Spiel Climate): 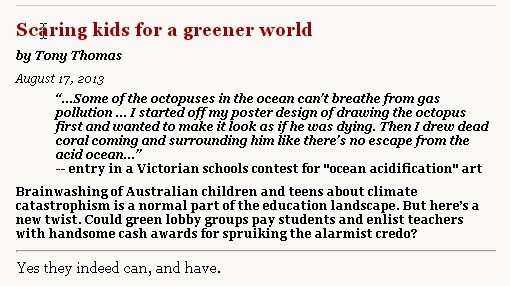 The reality of course is that the oceans are alkaline, and will remain so even under the projected and imagined impacts.  The terminology of 'acidification' no doubt delights the propagandists because it has more scary overtones than talking about reductions in alkalinity.   But like the even more misleading term 'greenhouse effect', the use of 'acidification' is also widely used in scientific literature and is not likely to be replaced any time soon.


To get an idea of the one-sided view promoted for this brainwashing exercise, one can visit the invaluable CO2 Science website and its Subject Index.  There are many relevant entries under Ocean Acidification,  and under Calcification (Corals), all to research published in the science literature.  Let me reproduce some extracts here merely to make the point that it is by no means established that rising CO2 levels are a serious threat to marine life in general and corals in particular:

(1)  Loaiciga, H.A. 2006. Modern-age buildup of CO2 and its effects on seawater acidity and salinity. Geophysical Research Letters 33: 10.1029/2006GL026305.
' Loaiciga concludes that "on a global scale and over the time scales considered (hundreds of years), there would not be accentuated changes in either seawater salinity or acidity from the rising concentration of atmospheric CO2." Hence, any changes that might occur would have little to no negative biological ramifications, as we have reported repeatedly in Journal Reviews archived under Coral Reefs (Calcification) in our Subject Index.'
(2) Pelejero, C., Calvo, E., McCulloch, M.T., Marshall, J.F., Gagan, M.K., Lough, J.M. and Opdyke, B.N.  2005.  Preindustrial to modern interdecadal variability in coral reef pH.  Science 309: 2204-2207.
' Contrary to climate-alarmist claims that historical anthropogenic CO2 emissions have already resulted in a significant decline in ocean water pH and aragonite saturation state, Pelejero et al.'s 300-year record of these parameters (which, in their words, began "well before the start of the Industrial Revolution") provides no evidence of such a decline.  In addition, and also contrary to what one would expect from climate-alarmist claims of how sensitive coral calcification rate is to changes in pH and aragonite saturation state, they found that huge cyclical changes in these parameters had essentially no detectable effect on either coral calcification or skeletal extension rates. '
(3) Ries, J.B., Cohen, A.L. and McCorkle, D.C. 2010. A nonlinear calcification response to CO2-induced ocean acidification by the coral Oculina arbuscula. Coral Reefs 29: 661-674.
'The three researchers, in their words, "propose that the apparent insensitivity of calcification and linear extension within O. arbuscula to reductions in ΩA from 2.6 to 1.6 reflects the corals' ability to manipulate the carbonate chemistry at their site of calcification." And it would further appear that that ability should serve the corals well, no matter how much fossil fuel is burned before various non-CO2-producing forms of energy generation become sufficiently developed to supply the bulk of the world's energy needs.'

This glimpse into the complexities of the science serves to highlight just how irresponsible and malevolent is the singling-out and promotion to children of exclusively alarmist claims in this area.