For the Climate Classroom Wall, and for Christmas gifts: the Josh 2020 Calendar, and his new book

Josh's calendar for 2020 may be his best yet, and that is saying something.  Glorious colours, great wit, and lots of insights, and reminders of stuff and nonsense from afflicted (aka 'anointed') ones of the CO2 Scare.

You can buy it here: http://cartoonsbyjosh.co.uk/

For the classroom wall, or the staff-room wall, or your kitchen wall - several conversation pieces each month - all with charm and even compassion, not least for the afflicted ones and their self-anointed leaders.

It also makes for a good gift, as does Josh's new book: 'All You Need to Know About Climate Change - in cartoons' 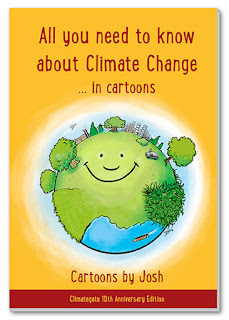 Here is Matt Ridley, writing in his foreword to this book:

'Nobody does a better job of exposing with wit the shaky foundations on which these predictions of doom are built than Josh.  In these pages are real scientific, economic and political arguments expressed in ingenious cartoons, their background explained in paragraphs of pithy text.'


Couldn't have said it better myself.

A great present for young and old, and it could especially help any teenagers you know at high school who may be deeply troubled thanks to the wicked propaganda they have been subjected to all their days.

You can buy it here:  http://cartoonsbyjosh.co.uk/books

Lots of ideas for high school projects on the CO2 Scare could be plucked from this video by discerning teachers: three penetrating thinkers and analysts on climate variation (and the current alarmism around it) - Ross McKitrick, Steve McIntyre, and Anthony Watts talking good sense, aided and abetted by Mark Steyn, a penetrating thinker and analyst of current affairs - as well as a lively chairman of this discussion:

And from the comments on that post, here is a link to a video with more explicitly highlighted ideas here for senior pupils doing projects on climate alarmism:
https://www.youtube.com/watch?v=ZUVqZKBMF7o&feature=youtu.be

And for pupils doing a project on English lit and climate change, or journalism and climate, might well find inspiration here:

And to mark the recent passing of Clive James, here is a relevant poem of his:

The imminent catastrophe goes on
Not showing many signs of happening.
The ice at the North Pole that should be gone
By now, is awkwardly still lingering,
And though sometimes the weather is extreme
It seems no more so than when we were young
Who soon will hear no more of this grim theme
Reiterated in the special tongue
Of manufactured fright. Sea Level Rise
Will be here soon and could do such-and-such,
Say tenured pundits with unblinking eyes.
Continuing to not go up by much,
The sea supports the sceptics, but they, too,
Lapse into oratory when they predict
The sure collapse of the alarmist view
Like a house of cards, for they could not have picked
A metaphor less suited to their wish.
A house of cards subsides with just a sigh
And all the cards are still there.
Feverish Talk of apocalypse might, by and by,
Die down, but the deep anguish will persist.
His death, and not the Earth’s, is the true fear
That motivates the doomsday fantasist:
There can be no world if he is not here.
-- Clive James, The Times, 17 March 2016

[This grand wee poem was also published on this blog in March, 2016:
https://climatelessons.blogspot.com/p/climate-culture-poetry-and-song-from.html]
Posted by JS at 18:02 No comments:

Climate Sense from a Politician - let your children see this


That invaluable blog, 'Not a Lot of People Know That', has an embedded video of an Australian politician making some telling points about a climate emergency which has become as fashionable as it is unfounded:

More of this please.  Will schoolteachers dare use this short video clip in class?  Let us hope there are still some in that profession who value reality over ideology, and dislike scaremongering about CO2.

Addenda
For more by way of chapter and verse, with lots of illustrations, about there not being a 'climate emergency' try:  https://realclimatescience.com/2019/11/there-is-no-climate-crisis/
'There is no climate crisis, but there is a crisis of climate superstition, fraud, incompetence, and censorship.  And it is being used to terrify children and threaten the future of western civilization.'
(hat-tip: http://climatescience.blogspot.com/2019/11/there-is-no-climate-crisis-and-heres.html)

Or, if you prefer video, here is a good one on this topic by the same author:
https://www.youtube.com/watch?v=8455KEDitpU&feature=youtu.be
(hat-tip: Greenie Watch)
Posted by JS at 12:08 No comments:

We need to protect children from Climate Chicken Littles

Jim Steele:
'By perpetuating bogus claims of a world ending in 12 years, the Chicken Littles are doing far more harm than blinding children to scientific evidence that many species, from polar bears to Adelie penguins, are thriving. Our children miss the “important lesson” that a “climate crisis” is only a theory supported by scary narratives, not facts. So how do we protect our children from Chicken Littles who seek to enroll vulnerable minds into their doomsday cults? How do we motivate our children to be good critical thinkers, and not blind group thinkers mesmerized by fear and ‘end of the earth’ scenarios?

We tell children fairy tales to alert them to the real dangers, such as Crying Wolf. In the original Chicken Little tale,  Foxy Loxy offered Chicken Little and friends the shelter of his den so they would be safe from the falling sky. Once inside Foxy's den, they were never heard from again!'

I usually put open letters on climate matters on this Page only:
https://climatelessons.blogspot.com/p/climate-wisdom-open-letters-and.html

But in view of poor Greta's impact on young, and other vulnerable or poorly informed people, I think it deserves a post of its own.  Some extracts follow:

An Open Letter to Greta Thunberg

Greta Thunberg:
You have declared yourself a leader and said that your generation will start a revolution. You have comported yourself as a credentialed adult and climate change activist who has fearlessly addressed politicians and world leaders. You have dropped out of school and declared that there isn’t any reason to attend, or any reason for you to study since there will be no future for you to inherit. You have, rather than attend your classes, been leading Friday Climate Strikes for all students in your generation across the globe. Your attendance at oil pipelines has been striking. There, you unequivocally declare that all oil needs to remain in the ground where it belongs.
I shall, therefore, against the backdrop of your activism, address you as an adult rather than as a child.
...
There are a few things that we, the rational adults of the world who are not bowing to you like guilt-ridden obsequious Babbitts need to say to you, Greta.
First, we did not rob you of your childhood or of your dreams. You are the legatee of a magnificent technological civilization which my generation and the one before it and several others preceding it all the way to the Industrial Revolution and the Renaissance, bequeathed to you. That growth-driven, capitalist technological civilization has created the conditions for you to harangue us over our betrayal. It is a civilization that eradicated diseases such as small pox from the word, and that lifted millions out of abject poverty in a universe you think is dying and decaying. It assured you a life expectancy that exceeded that of your ancestors. Most likely by focusing on economic growth which you demonize, and scientific advancement, that civilization will further enhance a robust quality of life and health for your descendants.
Here is a hard truth to ponder, Greta: if the great producers of this world whom you excoriate were to withdraw their productivity, wealth and talents—in short—their minds from the world today, your generation would simply perish. Why? Because as children you have done nothing as yet, with your lives besides being born. This is what we expect of children until such time as they can be producers by learning from their elders. You are understandably social and ecological ballast. You are not yet cognitively advanced to replicate the structures of survival of which you are the beneficiaries.
Children are important installments on the future. We have invested in you. It is you and your smug generation which think they have nothing to learn from the older ones who are failing themselves. Whom do you expect to employ the majority of you if you have neither the job credentials or life competency skills to navigate the world? The future unemployable-skipping- school-on-Friday obstreperous children?
The truth, as one anonymous blogger aptly put it, is that your generation is unable to work up to forty hours per week without being chronically depressed and anxious. Its members cannot even decide if they want to be a boy or a girl, or both, or neither, or a “they.” They cannot eat meat without crying. I might add that your generation needs “trigger warnings” and “safe spaces” as pre-conditions for learning in school. Its members have a pathological need to be coddled and protected from the challenging realities of life. Your generation is the biggest demander and consumer of carbon spewing technological gadgets and devices. An hour without any of them and too many of you succumb to paralyzing lethargy. Your generation is the least curious and most insular set of individuals one has ever encountered. Your hubris extends so far that you think you have nothing to learn from your elders.
Yes, we have betrayed you: by capitulating the world of leadership to bored, attention-deficit children who spout bromides, platitudes and slogans that a rudderless and morally relativistic culture accepts because a significant number of its denizens have become intellectually bankrupt and morally lazy.
...
Read the full letter here:    https://www.frontpagemag.com/fpm/2019/11/open-letter-greta-thunberg-jason-d-hill/
(hat-tip: Instapundit)

'On Nov. 20-21, 2019, in schools around the world, for ages down to kindergarten, Al Gore's "Climate Reality" group plans to give presentations based on Gore's highly fraudulent "Truth in 10" slideshow. '

Tom Nelson is drawing attention to a new threat to the well-being of children around the world - a new Gore-developed presentation designed to alarm and to upset.  Here is some of the promotion for it on Al Gore's own blog:

'The climate crisis affects all of us. And it’s up to all of us to solve it.

That is why Al Gore created the Truth in 10 slideshow, a 10-minute presentation that will help you spread a simple message to your community: the climate crisis is urgent, but the solutions are at hand.
Download the presentation, personalize it, practice it at home, and then go out and deliver it. Start with your friends, your family, your school, your house of worship, your business or community center.'
Tom's reaction:  'I think as many skeptics as possible should check out the map here. If a presentation is scheduled at a local school, please take the time to write a complaint letter.  (Please let me know via DM, email, or comment here if you do some pushback).'
Given Al Gore's poor track record on climate, this is not good news.  I daresay he may be hoping to ride on the new waves of publicity being generated by Extinction Rebellion.  These are political initiatives employing blatant scaremongering, and as such should have no place in schools.


Note added 7/11/19.  A recent report on the harm being done to children by such people:   https://www.breitbart.com/environment/2019/09/17/epidemic-of-kids-treated-for-eco-anxiety-over-climate-change/
Posted by JS at 17:35 No comments: