'Oh no! The Snow!' Cool Athletes Tell Kids about their Hot Planet - Snow Getting Harder to Find Say Some. 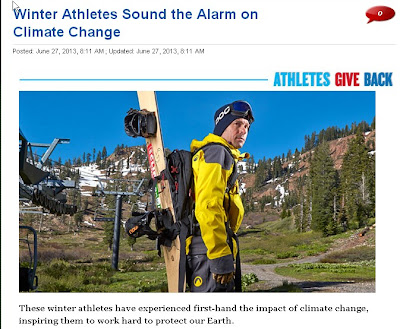 The article headlined on the left appeared in Sports Illustrated for Kids, SIKids, in June this year.

Here is the sort of thing they are doing:

"Protect Our Winters partners with The North Face and Alliance For Climate Education to visit schools through their Hot Planet/Cool Athletes program. Protect Our Winters educates students about the issue, using an interactive presentation with stories from professional winter athletes to inspire kids to make a difference. Jones says that paying attention to little things in your day-to-day life can help the environment, too. For example, he limits his "carbon footprint" by buying locally grown food. And instead of using snowmobiles and helicopters to get up mountains, he hikes for his snowboarding adventures. "This is the planet you are inheriting" Jones says."

It seems that Jones had a bit of an epiphany: "After seeing resorts closed and areas that once had great jumps for snowboarding shut down due to insufficient snowfall, Jones realized that climate change was a crisis that needed to be addressed."

Here's another one featured in the article sharing her wisdom with the young:

"Gleich says that she's seen how climate change can pose an immediate danger to winter athletes. Over the past two winters, Utah has seen a lot less snow, making the snow pack lower. In turn, this makes mountains more prone to dangerous — and sometimes deadly — avalanches. Additionally, with less snow, there are more rocks that could injure skiers.

Avoiding the hazardous areas has also taken away some of the fun of the sport. "When you don't have that snow pack, you can't ski the rad peaks you want to ski," Gleich says. "It's a bummer to have to stay on the smaller mountains."

Notice the variability in snow extent. Notice the lack of any dramatic trend.  Notice the simple straight-line fit is rising gently.  [the original chart here was not appearing, and has been replaced by the one shown, copies from http://www.climate4you.com/ - JS, 8 Mar 17]

I hope that some day, somewhere, a child in some school targeted for one of these Hot Planet/Cool Athletes extravaganzas will circulate this sort of chart ahead of the visitors arriving with their propaganda kits.

Once again, a look at the data is enough.

Inch by inch, row by row
We can make the rascals go
All it takes is to look, don't you know
For their claims are so unsound.

(to the tune of the Garden Song)

Note added later: readers might find this collection of duff winter-forecasts by those who wish to alarm us about climate quite amusing, if it weren't for the reality that the people behind them have been very influential and therefore harmful to society: http://notrickszone.com/2013/04/04/climate-science-humiliated-earlier-model-prognoses-of-warmer-winters-now-todays-laughingstocks/

Note added 17 April 2014.  Much of North America has been enduring a very cold winter, with record levels of snow.  According to this report, for example, 5 of the snowiest winters on record in Detroit have occurred in the last 11 years: http://notrickszone.com/2014/04/16/bastardi-detroit-sets-all-time-record-snowy-winter-5-of-the-snowiest-winters-occurred-in-last-11-years/

Note added 15 September 2014.  The foolishness of Jones and Gleich is further illustrated with this plot: