Paying for the Davids tackling the Goliaths of CAGW

My previous post noted that sums in excess of $22 billion a year are being spent on climate matters by federal agencies and sub-agencies in the United States, and every single one liable to have a vested interest in continued widespread alarm, at the very least within politics and mass media circles.  Monster agencies.  Goliaths in the game.  But, as the legend goes, a Goliath can be brought down by a boy with a well-aimed catapult.  Some do not even need to be brought down, merely calmed down.  Outside of government, if not outside of government funding, can be found wealthy corporations such as the WWF with a clear financial interest in stirring up fear to maintain their high profile and encourage donations, or the British Broadcasting Corporation which has chosen to promote climate alarm and hinder criticism of it.  These too are Goliaths.

The Davids of resistance to these Goliaths can be found on the blogosphere, and many, possibly, all are operating on budgets in the range between zero through shoestring to relatively modest. What would happen if those of us who admire their work were to make a bigger effort to make regular payments for it?  £5 a month  subscription from a thousand people would surely make quite a difference to many a solitary blogger with a great deal to contribute but also with a need to take care of themselves and their families.   It would also help to encourage larger organisations by providing tangible evidence of support.

So, readers of this blog, what can you afford to spend, month after month in a reliable fashion, for what you admire and think important in the climate saga?  Not all of us have the time, nor feel we have the talent, to write, to analyse, and to study the science or the policies involved in climate alarmism, but we can surely name many people who can to good effect.  Maybe we can chip in from time to time with comments and the odd donation, but maybe we could also tax ourselves to make regular payments?  I’ve worked out a percentage of my quite modest retirement income to spend, and will be looking into the setting up of standing orders to get this established as a routine, regular event.  I hope tens of thousands of others will do the same.  See the links on the rhs of this page for possible beneficiaries. Beneficiaries in the sense that writers of books are beneficiaries of those who buy them, and journalists are beneficiaries of those who buy their newspapers.

Jo Nova, in a comment  in response to Bob Tisdale’s recent announcement of his temporary retirement from full-time blogging because of a shortage of money, has suggested a more organised approach which looks very promising if suitable expertise and administrators can be found.  Her idea is to set up a fund to which people could make tax-deductible contributions, and which would support independent researchers:

‘Bob, no, you know, I’m not satisfied with this. Not at all! How much would it take to keep you going? If we got 10,000 people to donate $10 a year, would that be enough? What if we made it $1 a month?($120k pa)
There must be a better way to do this, and we grown-ups need to get serious. It’s crazy that we rely on government-sausage-machine-science, and dutifully pay our taxes of thousands every year but we can’t independently create say 20 full time jobs for people checking and critiquing the government output.
Yes, I’m as bonkers as you and none of us want to ask for money, but in the end we don’t survive on thanks and praise alone. It’s time to be smart. Science needs truly independent researchers. And those truly independent researchers deserve remuneration that means they can send their kids to decent schools, afford health care, fix the bathroom, and go on the odd holiday. At the moment, they’re self-funding — they raise the money through other work and shares
If anyone out there knows how to set up tax deductible non-profits (or understands the feasibility of it – is it worth doing?) you could make a big difference by pointing out where we ought to be aiming, and the short-cuts to get there… the independent real science sector would so appreciate legal and accounting advice.
Greenpeace and WWF can do it. Why are we willing to accept that sceptical scientists can’t?’
I hope something comes of that as well.  Jo Nova can be reached via her own blog:  http://joannenova.com.au/

Big Climate USA: a voracious monster scaring the children, and threatening the land and its people

Monsters used to be part of mythology, but we can see them reappearing in modern forms to frighten children into conforming with the views and the demands of climate campaigners.  Where do they come from?  Who is paying for them?  Some answers for the States at least have surfaced recently.

A letter from the Committee on Energy and Commerce of the House of Representatives was sent in October 2013 to the director of the Office of Management and Budget to get an update ‘regarding climate change activities being carried out across the federal government’.  They appended a chart from 2011 listing ‘over 40 federal agencies and sub-agencies’ and asked if it was still accurate.  I daresay it may need enlarging now, but in the meantime here it is, a partial anatomy of a federal monster which is now gobbling up cash at the rate of at least $22 billion dollars per year: 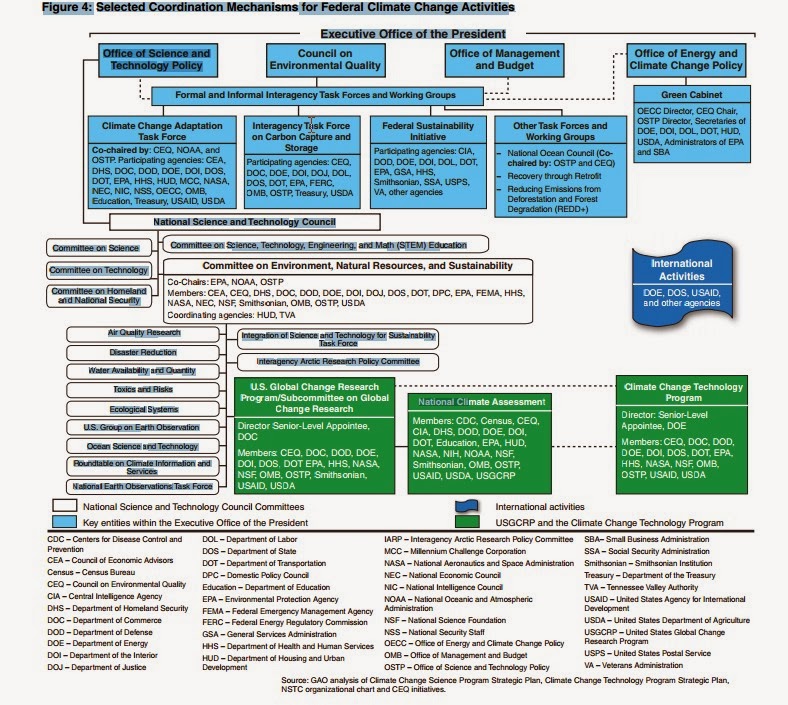 The latest wheeze of those promoting this scare in the States is to blame the cold spell on global warming via its presumed effect on a new piece of jargon for the general public, the polar vortex.  This is another sorry example of shoot-from-the-hip junk science designed to promote headlines and save face in the mass media.  It has already been discredited.  Like so many other examples of this in recent years, the speed of rebuttal is remarkable.  More and more informed people, I surmise, have lost patience with the charlatans who presume to speak in the name of Science when in fact they are merely crafters of press releases to suit the political needs of the moment.
See http://hockeyschtick.blogspot.co.uk/2014/01/record-cold-due-to-global-warming.html for a compilation of some relevant papers and articles on this particular piece of PR.
[P.S. Climate Depot has also assembled a  list of materials on the polar vortex spin]
[P.P.S Paul Homewood present more analysis in support of his concluding sentence 'More junk science from John Holdren. ']

But back to our monster.  Peter writing in the American Thinker, published the above chart this month, and provides many interesting comments that are very relevant to the child-scaring propensities of the monster it reveals.  Namely the so-called educational initiatives (I have added the bolding):

“A recent Wall Street Journal article expressed concern about low math and science standards in the Common Core curriculum, despite President Obama's frequent speechifying about the importance of science, technology, engineering, and math (STEM) education.
There are many possible explanations for this sorry state of affairs, but one factor that doesn't add anything positive is the politicization of education, a culmination of fifty years of a "long march through the institutions" by leftists. Humanities and social sciences have been most corrupted, but STEM disciplines are being assaulted by a new agenda promoting "climate education" or "climate literacy."
A report titled "Climate Literacy," signed by President Obama's science czar John Holdren, declares that "Climate Science Literacy is part of Science [STEM] Literacy." The usual arguments are presented: 1) recent global warming "represents an extraordinary rapid rate of change compared to changes in the previous 10,000 years." 2) Rising temperatures will lead to "rising global sea level and increasing frequency and intensity of heat waves, droughts, and floods." 3) "human activities are now the primary cause of most of the ongoing increase in Earth's globally averaged surface temperature."
Many climate scientists disagree with these three propositions; at very least, they are partisan viewpoints with political implications that have no place in public education.
This campaign is being advanced by local, state and federal governments, by universities and various non-profits, and is aimed at K-16 -- kindergarten through college.”

This is an image of an inflatable monster.

You can inflate a lot of monsters with $22 billion a year. Here's one at NOAA for example.

An informed public will see them for what they are, and more and more are joining in the sport of pricking them.

Every one they burst, is one less to scare the kids with.

Note added 07 February 2014.  WUWT has an amusing clip on the deviousness behind one of the charts used by Holdren in the above propaganda broadcast: http://wattsupwiththat.com/2014/02/07/friday-funny-two-guys-with-a-ruler-blow-up-the-white-house-global-warming-video-claims/
Posted by JS at 11:51 No comments: