Good News About Climate in Schools: Under 14s in England May Get More Protection from Eco-Indoctrination 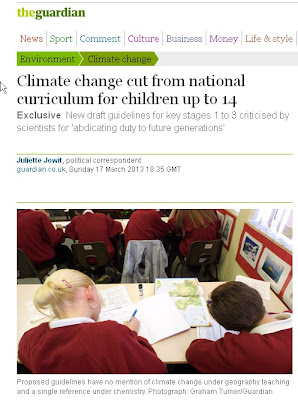 A story in The Guardian on line today has this:

'The latest draft guidelines for children in key stages 1 to 3 have no mention of climate change under geography teaching and a single reference to how carbon dioxide produced by humans impacts on the climate in the chemistry section. There is also no reference to sustainable development, only to the "efficacy of recycling", again as a chemistry subject.'

The report is in The Guardian, and so of course comments from those keen to promote climate alarm are quoted below the above paragraph.  For such people, this is bad news.  But for others like me, and of course like all the children and their teachers, this is good news.

Under-14s are too young for the physics and maths and the politics of this invented crisis, and for the cruelty of the gloom and doom and destructiveness which can so readily be delivered alongside.

And of course, while this is only a draft for discussion:

'The proposed changes, which are still under consultation by the Department for Education (DfE), were broadly welcomed by other groups, including the Geographical Association which represents more than 6,000 geography teachers, and the Royal Geographical Society.'

the very fact that such enlightenment is being seriously entertained is a step in the right direction.

Note added later on 17 March:  Links to the consultation site and to the relevant document are here:

[hat-tip Bishop-Hill, and a blog by Joe Smith linked to there]

Note added 19 March.  The original title of this post said 'England & Wales', but I see from the consultation document that only England is relevant here.  I was unable to use strikethrough to amend the title, and so I have reluctantly just deleted '& Wales'.
Note added 10 May.  What was all the fuss about?  According to Pauline Latham, a Conservative MP who writes on her blog 'I have been contacted about the inclusion of climate change in the curriculum. Unfortunately, Early Day Motion 1208 has now lapsed as the Parliamentary Session has ended. I would, however, like to take this opportunity to assure you that the Government is not and does not have any plans to remove climate change from the National Curriculum.

The new draft national curriculum will in fact give pupils a deeper understanding of all climate issues. Climate change is specifically mentioned in the science curriculum, and both climate and weather feature throughout the geography curriculum. Nowhere is this clearer than the science curriculum for 11- to 14-year-olds, which states that pupils should learn about the ‘production of carbon dioxide by human activity and the impact on climate’.
This is at least as extensive, and certainly more precise, than the current science curriculum for that age group, which says only that ‘human activity and natural processes can lead to changes in the environment’.'  http://www.paulinelatham.co.uk/content/climate-change-curriculum