On the one hand, here is our advisory note  in which we tell you: 'climate change was a complicated topic many found "daunting and confusing" and could be controversial, leading to many different opinions.'

On the other hand, here are our teaching materials which tell you: 'a single conclusion, that carbon dioxide was virtually solely responsible for driving climate change and presented a range of "apocalyptic scenarios".'.

The text italicised in quotes is based on the reported words of a Senator in South Australia - hat-tip Greenie Watch.  Here are more details of the position taken by this senator, Cory Bernardi, in a hearing with the CSIRO:
"Yet the information that is produced and distributed to schoolchildren appears only to present a single opinion about what is driving climate change," he said.
"How can you explain that given that the explanatory note for teachers says it leads to many different opinions?"

And the answer from the propagandists' friends, the CSIRO?  Not exactly impressive:

'The CSIRO's deputy chief executive for operations Mike Whelan said he had not personally seen the material, but envisaged that the program would be consistent with comments made to teachers.  He told the senate committee the program had only become his responsibility three weeks ago, but he would examine the material.'

I wonder if they are beginning, at long last, to realise that the alarm about CO2 is overblown, based on a flimsy theory of how the climate system works, and all but devoid of observational evidence to support its predictions.

As Mother Nature continues to refute the alarmist conjectures one by by one, the propagandists do of course change the spin.  They abandoned 'Global Warming' when it become clear that it wasn't much.  They backed away a bit from 'Climate Change' when it became clear than the climate was displaying business as usual.  Then they had a feeble shot at 'Climate Disruption', but those pesky hurricanes and floods and icecaps and polar bears just refused to play along and do their part.  Now, as evidenced by a briefing paper for the UK Parliament (h/t Bishop Hill), they are going for 'Hidden Threat' as in 'natural forms of climate variability are likely to be the main influence on the UK's climate over the next few decades'.

What?  Whatever happened to that hockey stick plot, the dizzying rise in temperatures underway, the children who won't know what snow is, the desperate urgency of a Prince Charles or Gordon Brown with their X months left to save the world so better change those lightbulbs quick?  Better scientists than the propagandists choose to quote, had said from the start of the scare that the effect of CO2 would be hard to detect against the variations due to other factors.  They were classed, offensively, as 'deniers'.  Now their wisdom is getting some indirect recognition - the flattery of imitation, but lacking the justice and the courtesy of a climb down by those who did not hesitate to try to scare us, and our children, to further their own ends.

The scientific side of the scaremongering has always had large uncertainties, often glossed over or ignored by such as the IPCC and others who feared that sharing them would inhibit political actions.  They were right, I guess.  Now we are burdened with the monstrous idiocy of the Climate Change Act, and the monstrous cruelty of teaching materials designed to scare children out of their wits.

Ah, but no worries.  We did tell the teachers 'climate change was a complicated topic many found "daunting and confusing" and could be controversial, leading to many different opinions.'  And we did tell the politicians 'natural forms of climate variability are likely to be the main influence on the UK's climate over the next few decades'.  We just, kind of , you know, left it a bit late. 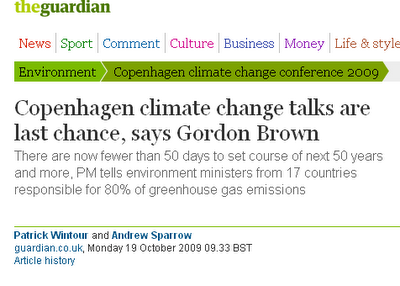 Note added 16 Feb 2012 The Australian Climate Madness site has a relevant posting from 14 Feb about government-funded climate propaganda on a TV network : http://www.australianclimatemadness.com/2012/02/governments-climate-indoctrination-exposed-again/