That epicentre of scarequakes on climate and carbon dioxide, the University of East Anglia (UEA) has been lowering its sights recently to target more than 60 early teenagers in their neighbourhood. (hat-tip: Dave W).  Power Engineering carries the story, as does the print edition of the Norwich Evening News on 9th February (see below).  The impression it gives me is that they want them to be receptive to renewables as a source of energy, and at the same time get them involved in a scary scenario about a planetary emergency to get them on side.
Why would a university stoop to such a thing?  Let us first look at it:
First, you get the youngsters to imagine that fossil fuels have disappeared, that this is really scary, and that they must come up with ideas to save the world.  You pay an outside consultancy to do this, since it is one of their suite of activities for the young, and they no doubt have it down to a fine art.  Now by itself, I can imagine really good teachers, with the right type of pupils, engaging their attention in such a way (with no need of course to pay others to do so).  It is easy to imagine this could lead to lots of ideas and useful discussions.  But what about the rest of it?
Second, you bring in people with a vested interest in renewable energy (in this case Aquaterra ,  Seajacks and a tiny start-up called Wind Elements Ltd) and/or carbon reduction schemes and devices (in this case, Lotus Cars and  the University of East Anglia – the UEA, home of the Low Carbon Innovation Centre , commented on here in 2010, and of course of CRU, perhaps most widely known as the source of the Climategate materials ).  You arrange for the pupils to speed-date their way amongst them. 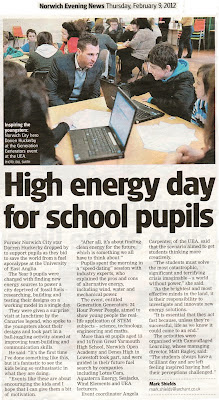 Third, you alert the press to what you are up to, perhaps invite them to be there.
Fourth, you invite a children’s hero to attend, in this case a local footballer, perhaps in order to increase the possibility of a positive response from the press, and maybe even encourage more pupils to attend.
Now how does it look?  Can you imagine this happening in the old Soviet Union (‘First, imagine the capitalists have closed down all their businesses in some yet-to-be-liberated land, and you have to save the people there from starvation.  Second, let me introduce Commissar Crulcicski who wishes to tell the class about the new 5 year plan, and the glorious ideals of the Party.  You will each have to talk with him.  You need pay no attention to the comrade reporter from Pravda sitting at the back, but the famous footballer Stakhanovily Matthewski is here to distract deal with any technical questions that may arise.  Let us begin.’)
There’s more.  The no doubt well-intentioned facilitators of the simulation game (Camouflaged Learning) describe it as follows:
‘As the day begins, the students are informed that the Earth’s remaining reserves of fossil fuels have finally been exhausted and, as a result, the fabric of what we consider normal life has immediately started to crumble. No more light, no more heat, no more iPods. No more anything, in fact, meaning something needs to be done- and soon- before the world falls into total chaos.’

The UEA representative at the event is reported as hyping this up just a bit:

‘The students must solve the most catastrophic, significant and terrifying crisis imaginable – a world without power’, she said, ‘…It is essential that they act fast because, unless they’re successful, life as we know it could come to an end.’


If I were of a cynical disposition, I’d call this event ‘Camouflaged Selling – of renewables by the companies, and of alarmism by the university’.  Perish the thought.  Who would do such a thing with such young people?

Poor pupils of Norwich.  A similar wheeze was followed by energy giant, EDF, last year at a high school in Norwich when they invited a famous athlete to attend a sustainability day of their devising.  To their credit though, it seems they might have skipped the bit where you first scare the kids:
‘“Days like these are something that pupils will remember for the rest of their lives and it is great that EDF Energy can combine this with a way of getting people together to fight climate change.”
It is hoped that the school’s sustainable efforts will inspire others in the local community to follow in its footsteps and think about what they can do differently in their lives to be greener.
Clive Steed, sustainability manager for EDF Energy said: “We can only tackle climate change effectively by taking action together. As a leading energy company, EDF Energy has an ethical responsibility and the expertise to inspire people to reduce their carbon footprint, which is why we kicked off Green Britain Day.’

Here is a simple proof in 10 easy steps why the Greenhouse Effect is a physical impossibility.

(1) The IPCC claim that radiation from a cooler atmosphere slows the rate of cooling of the (warmer) surface, thus leading to a greenhouse effect.

(2) The "rate of cooling" is a 24 hour worldwide mean, so wherever the Sun is warming the surface (any sunny morning) the rate of warming would have to be increased by whatever process is slowing the rate of cooling.

(3) Thus extra thermal energy must be added to the surface by such radiation in order to increase the warming rate in the morning and slow the mean rate of cooling calculated from both day and night rates.

(4) Now the Second Law of Thermodynamics relates to heat transfer which is not the same as energy transfer. Radiated energy can be two-way, but heat transfer between two points is always one way and it is invalid to split such heat transfer into two opposite components and try to apply the Second Law to each. Physics doesn't work that way.

(5) Hence, the surface cannot warm faster in the mornings due to such an imaginary heat transfer, because that would be clearly breaking the Second Law no matter what. Nor can it slow the rate of cooling because of (4). And in general you would expect the same process to happen whether the surface is warming or cooling.

(6) So, those photons from the cooler atmosphere are not being converted to thermal energy in the warmer surface, as Prof Claes Johnson proved in Computational Blackbody Radiation.

(7) Hence the effect of the photons being either reflected or scattered is that there is no impact on the surface at all.

(8) It is also clear that there is no significant transfer by diffusion or conduction from the atmosphere to the surface because the surface absorbs more solar insolation than the lower atmosphere, and we observe that the atmosphere is generally cooler and even cools faster at night than the surface.

(9) So it really does not matter even if extra thermal energy is trapped higher up in the atmosphere because it does not affect what we call climate, and any such energy cannot make its way back to the surface, except possibly an insignificant additional amount in precipitation.

(10) Hence there is no valid physical way in which backradiation or absorption by carbon dioxide in the atmosphere will cause a significant atmospheric greenhouse effect.

If I haven't convinced you, read this paper Falsification of the Atmospheric CO2 Greenhouse Effects Within the Frame of Physics http://arxiv.org/PS_cache/arxiv/pdf/0707/0707.1161v4.pdf

The back of an envelope reasonings beloved by alarmists start with comparing the atmosphere to a greenhouse and are therefore immediately misleading. Then they use a planet of uniform surface, of infinite thermal conductivity, of no rotation, of no seasons and of energy exchanges exclusively involving radiation. Their planet is a virtual surface somewhere between the real one and the tropopause, and that they can link it to the real one's temperatures within even 20 to 50C is a marvel. But to use this crudeness to detect, define, and defend a change of a degree or two is silly beyond belief. The prominence of political activists, geographers and computer modellers in the alarmist camp is grounds for helping explain why such crude computations are taken as much more than ballpark guestimates since they need them for their scaremongering. For them, it looks like hard science. That has still to be 'settled' and I welcome your work as evidence of that. It is nearly 40 years since I studied atmospheric physics, and I do try from time to time to get back into it, and clarify my own thinking about the role of radiation in the system.