Feed kids a constant diet of climate anxiety; some commit suicide, some turn to radical activism, some choose to become vegans or withdraw from life or vow to never bring children of their own into what they believe will be a ruined world.

The solution is obvious. Stop frightening the children.

When children less than 6 years old are seen as 'instruments' 'for the achievement of a sustainable society' and that 'we' must make them  'understand deeply, and even shock them out of their unawareness', then something is seriously amiss; somebody somewhere is up to something we should resist.  The quotes are from a UNESCO report recently reported on by Donna Laframboise. 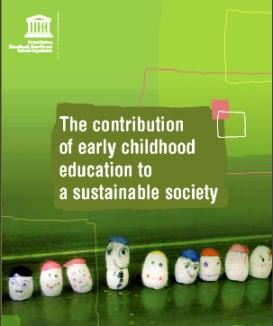 Targeting toddlers under the smokescreen of ‘sustainable development’ has more than just a hint of the peculiar impulses which grip some campaigners convinced that CO2 is a threat to life on earth, and most especially to humans and to polar bears.  Their negativity and exploitation of fear can lead to the absurd as well as to the totalitarian.  Their answer is invariably more state control of what we do and what we think, and where we live, and how we live, and what we might try to do.  Some kind of global rulebook, devised and enforced by an elite is what they want.  Nothing new there – countless religious and political mvoements have sought exactly that for thousands of years.  What is new is the appeal to climate science rather than to one or more deities, or the pseudo-science of Marxism.  Sometimes the outputs of computer programs are brought down as if from on high to be treated as part of the new gospel, interpreted by experts who do not care to have their authority challenged.  There is also nothing new in the targeting of the young, where the big idea is presumably to get at them before they have much chance of resistance.

The report is about a UNESCO conference held in 2007.  The conference-culture it represents is almost caricatured by this extract from the report:
‘This report originates from the international workshop, ‘The Role of Early Childhood Education for a Sustainable Society’, jointly organized in Göteborg, Sweden, by Göteborg University, Chalmers University of Technology and the City of Göteborg, from 2 to 4 May 2007. It was attended by thirty-fi ve participants from sixteen different countries (see ‘List of Participants’). The workshop was a follow-up to the international conference on education for sustainable development, ‘Learning to Change Our World’, held in May 2004, in Göteborg. It was one of four preparatory workshops leading to another international conference on education for sustainable development, to be organized in 2008 or 2009, in the same city. The aim of the four workshops is to discuss promoters and barriers related to learning for sustainability, and to propose recommendations for the upcoming international conference.'

The delegates were described as not really knowing what 'sustainable development' was (and who can blame them!):

‘A common question raised in the beginning was ‘What is sustainable development?’ Most of the participants were not familiar with the concept,’

Which makes me think one motivation for this conference was to spread the gospel to them, the innocent delegates, rather than as a meeting place for like-minded people to discuss their work and ideas.  This is reinforced by most of the papers presented - they really are mostly about motherhood and apple pie, about how good it would be if more children could get out in the open-air, enjoy nature, and be kind to one another.  But in amongst this worthy stuff, there are contentious materials that raise the hackles of the sensitive reader, such as this gem:

‘Al Gore’s (2006), An Inconvenient Truth, the Stern (2006) review into the economics of climate change, and the report of the Inter-Governmental Panel on Climate Change (2007), have heightened awareness of how humans are over-stretching the Earth’s life-support systems.’ (page 19)

Each of the three sources given have been widely discredited as reliable guides.  The 'heightened awareness' of which she speaks is best decoded as 'irresponsible, ill-informed alarmism'.

Laframboise has spotted several other phrases to raise the hackles of the concerned citizen:


'Anthropogenic Global Warming', all but spent.
'Sustainable Development', let's try that one again.

Now that the climatology, politics, and economics of climate alarmism have been so widely exposed as having no more than 350ppm of integrity and truth, many more people are challenging the associated doctrines.  So much so that one of the arch-plotters faciltating this particular wave of scaremongering, the UN and its various agencies, have decided to downplay 'climate change' at the next Earth Summit, to be held in Rio de Janeiro this June.  What is the focus to take its place?  Why, none other than 'sustainable development'.  Same old attendees, same old luxuries, same old resolutions, same old intention of controlling the world, not least through the crippling of industrial economies, and the keeping of the developing ones underdeveloped (e.g. by massive transfers of funds to their rulers), while at the same time furthering the aggrandisement of certain elites required to supervise it all.

Here are my takes on what 'sustainable development' might really mean:

sustainable = suppressed, inhibited,backward-looking, most likely centrally-planned and imposed by force

sustainable development = suppressed development, centrally-planned by those who know what is best for us and holding out all the promise of past attempts at central-planning on grand scales


Fred Singer has published a brief history of 'sustainable development', which goes back to the 1960s, and in that piece he provides this quote from a Peter Wood, president of the National Association of Scholars:


' Sustainability sounds like a call for recycling and clean drinking water.   But its proponents are much more ambitious. For them, a sustainable society is one that replaces the market economy with top-down regulation. They present students a frightening story in which the earth is on the brink of disaster and immediate action is needed. This is a tactic aimed at silencing critics, shutting down debate, and mobilizing students who never get the opportunity to hear opposing views.'

We now know that 'students' has a very wide scope.  It includes toddlers at nursery schools!  The UN has a declaration on the rights of the child.  Presumably it does not include the right to be protected from interfering busybodies and debate suppressors on the international conference gravy train.  Melanie Phillips saw the danger just as soon as she saw the first Climategate emails back in 2009: '...what we are dealing with here is the totalitarian personality. One thing is now absolutely clear for all to see about the anthropogenic global warming scam: science this is not.'

Note added 9 Feb 2012:  '“Every early-years teacher in the state and the independent sector has told me how much they wish the Government wouldn’t treat childhood as a race,” says Sue Palmer, author of Toxic Childhood and a signatory to the letter.
“Schools have become sausage factories as it is, and putting little children into the grinder earlier and earlier doesn’t make it any better.”'
Quote from an article on state interference at the pre-school level: http://www.telegraph.co.uk/education/9066921/Knickers-to-the-nappy-curriculum.html