Schools without Scruples over Climate: never mind the facts, the computers have spoken

Definition of 'Scruple': a doubt or hesitation that troubles the conscience or that comes from the difficulty of determining whether something is right.  Schools such as the one reported on here in Norfolk, UK, don't seem to suffer from such a thing when it comes to climate: 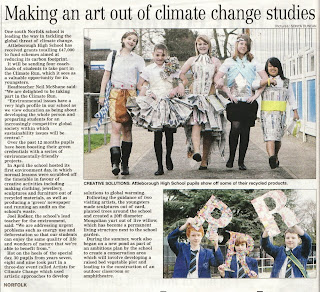 But what is the reality?  First, with regard to the weather phenomena of the planet, nothing at all extraordinary has happened anywhere with regard to temperatures, precipitation, storms, ice extent, glacier movements, or sea levels.  All we are seeing is perfectly consistent with business as usual for a turbulent atmosphere with a complex, irregular surface, and varying orbital, solar, and oceanic features.  The null hypothesis of 'business as usual' has not been discredited by observations.

Second, with regard to argument from authority, the circular nature of that can only be broken when pushed into, when it will be discovered that political activists orchestrated a global panic by exploiting the conjectures of a few dozen workers in the field of climatology, especially those parts relying heavily on computer models.  The limitations of their work are becoming more apparent year by year.  Let it be summarised as follows: the computer models are too primitive to be fit for prediction, the data sets are too sparse in both space and time to be sufficient as a detailed guide to what has happened in the past, let alone be capable of reliable extrapolation into the future.

So, we are in a situation in which nothing unusual has been seen to be happening to the weather, to the sea, or to the ice.  There has been a remarkably steady growth in ambient CO2 recorded at Mauna Loa, a volcano on a Pacific island.  Just about anything and everything in and around the atmosphere can influence climate, including CO2.  The problem is not determining whether this factor or that has an influence, but rather it is determining the nature and the magnitude of it. The simplest model for increasing CO2 levels is that they would lead to a modest overall warming, one which would be hard to reliably confirm in the variability of temperatures due to all the other factors involved, a warming of around 1C for a doubling of the ambient levels. But a few people programmed up computers to illustrate a much more dramatic effect of CO2 via an unconfirmed positive feedback mechanism.  This was spotted as a godsend by those who wished to see an end to industrialisation or a weakening of western power or a dimunition in energy consumption or a reduction in population or an overthrow of capitalism or a massive transfer of cash to the developing countries or the dawn of world government or a rise in their own level of recognition as wise prophets or seers or an increase in the audience for their media or an increase in the grants awarded to their institution or more votes for their party.  And what a hugely successful 'big thing' they have made of it over the past 30 years.  That man-made CO2 is leading to catastrophe is now a 'given' in our schools, and leads to events such as this one: 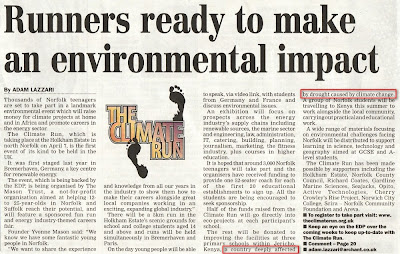 But it is by no means properly treated as a 'given'.  It is not satisfactory to base so much belief and commitment on a flimsy foundation.
Sources:
http://www.edp24.co.uk/news/environment/photo_gallery_attleborough_high_school_tackling_climate_change_1_804906
http://www.theclimaterun.org.uk/shaping-norfolks-future/

Two years ago I went to a PTA meeting at my daughter's high school taking with me a letter I'd received from her 'Year Leader" teacher which informed me that my daughter was regarded as being "disruptive".
I met with the Headmaster and managed to get him to one side to show him the letter and I asked him if he knew about it. He said that he did and that the letter was sent with his approval. He told me that my daughter was disruptive in class because she persistently queried all pro-AGW statements.
I informed the Headmaster that this news pleased me as it meant that my having taught my daughter to think for herself and having shown her the other side of the argument, she had made up her own mind based on the evidence which she had read and that she was capable of independent thought.
The Headmaster argued back that what I was teaching my daughter was tantamount to child abuse. My response turned the air blue for a fair distance around. The Headmaster fled, unable to counter any of the facts I placed rather firmly before him.
No further letters regarding my daughter's behaviour in class were forthcoming.
A couple of weeks later I was approached by one of my daughter's teachers who apologised for what was being taught in the school but that she had no choice as their curriculum was dictated by Central Government orders.
My daughter, now a year into her Law degree, remains highly sceptical of anything to do with CO2 being both a pollutant and being responsible for any anomalous warming of the planet, I'm pleased to say.

Can believe the stupidity of people believing in allt his AGW nonsense....its like its been a mass lobotomisation of the population...or maybe this AGW stuff just exposes the inate cerebral laziness of people who just believ what the govt tells them?