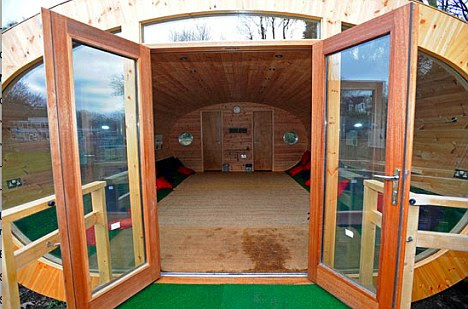 Foiled by the winter: The £25,000 eco-classroom that can't be used because solar panels don't provide enough heat


Simple arithmetic would have shown this building to be a foolish one, yet it was constructed.

Modern technology would have made a better building than this one, yet it was constructed.

The importance of the building as a gesture, no matter how absurd, outweighs, for some, all other considerations:
"Headteacher Jill Hughes defended the project and said she hoped classes would be held in the classroom when the weather gets warmer.  She said: ‘We’re delighted to have the Living Ark - its a tremendous resource both for the school and the local community and is an important part of the Muswell Hill low carbon zone initiative.’ "

The source of this madness, this modern ideology, can be traced to political exploitation of computer models of the climate which are hopelessly inadequate.  Just like this building.  It is a metaphor for the wastefulness and the incompetence and the smugness of CO2 alarmism.

Note added 7 March: details of a grander scheme costing colleges in Los Angeles the loss of $10million are given here:
http://hockeyschtick.blogspot.com/2011/03/colleges-blow-10-million-on-wildly.html, and once again it would have been avoided if arithmetic had been allowed at least equal status with ideology.

Note added 11 July: another example of this foolishness, this time from East Germany :
'Pupils and teachers dread every school day at the SeeCampus. If the deodorant of just one person fails to work, then half the classroom goes into a coma. The ventilation in the exemplary passive building is a catastrophe. There’s an extreme lack of fresh air on hot days. Because of concern over the health of the children, who complain about headaches and fatigue, parents are threatening to stop operation of the school through legal action.  The school building SeeCampus in Niederlausitz becomes completely overheated on summer days and is badly ventilated. Headaches and cardio-respiratory problems with pupils and teachers are the result. The number of sick days is climbing rapidly.'
http://notrickszone.com/2011/07/11/flopped-green-passive-school-suffocating-students/


Note added 23 September 2013: more metaphor opportunities:
(1) children threatened by insects dropping in from an 'eco-school' roof:  http://www.telegraph.co.uk/earth/wildlife/10327504/School-closed-after-pupils-bitten-by-mites-in-eco-roof.html
(2)children threatened by mould and damp in another 'eco-school':  'Devon County Council says it has already spent £250,000 to investigate the problem and without urgent repairs, it says teaching pupils inside the building could seriously damage their health.'
http://www.thisiscornwall.co.uk/Acclaimed-eco-school-forced-shut-classrooms-years/story-19789593-detail/story.html#ixzz2fi669r8B