Fighting from the Bottom: a pupil strikes back against climate-cloaked indoctrination

A little flippant perhaps, but in this tiny act of defiance by what may be a 14-year old completing a 'climate questionnaire' I see a spark of hope: 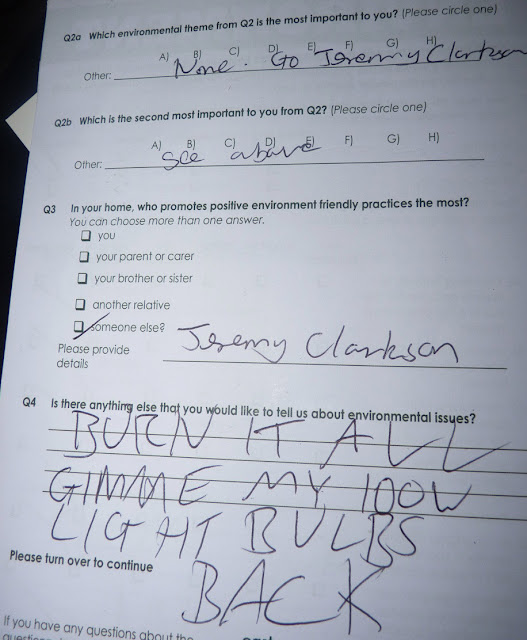 It would seem this was captured by someone while entering the children's responses into a computer.

For non-UK or non-TV viewers: Jeremy Clarkson is a charming free-thinker, decidedly averse to being told what to think by the PC brigade.  He leads an extremely popular tv-programme about cars (mostly).  He also writes articles for newspapers, such as this:

A little humour is not amiss in the face of the all-but-relentless propaganda in the media for the establishment's take on climate variability, and how it can be exploited by governments and corporations alike - such as the WWF for example, or Greenpeace, or Goldman-Sachs, or, while it lasted, Enron.
Posted by JS at 17:01

That's excellent! I will be passing it on...