Susan Crockford has a new post up about the deceptive, political goal-driven propaganda based on polar bears: 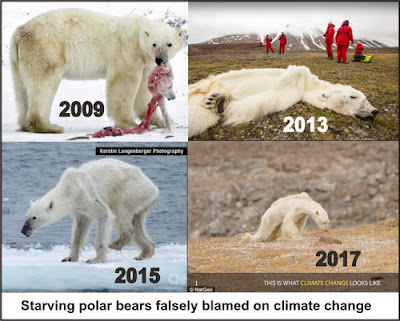 'Here I summarize the truth about all four of these starving polar bear images that have been used since 2009 to emotionally manipulate the public (especially young girls), into getting on board the climate change band wagon. Rational people have seen through the rhetoric and come to realize that climate change is virtually never the cause of starvation. However, some poor kids have been scared to death by these images and the stories of climate change catastrophe they inspired – they are very real victims of climate change messaging at its worst.'

Click the link by the picture above to read the rest.  And try to protect any children you know from this sort of abuse.  The polar bears are generally doing OK.  But Greta and the others are most certainly not.

Note added 27 Sep 2019.  Poor Greta flounders when she does not have a script provided for her:  https://www.youtube.com/watch?v=0bwLt_5t73g   Who does provide her scripts?
Note added 29 Sep 2019.  More details of those behind the abusive exploitation of this poor child:   https://notalotofpeopleknowthat.wordpress.com/2019/09/28/gretas-soros-connections/
and more here on their lack of imagination:
https://www.americanthinker.com/blog/2019/09/greta_thunbergs_speech_to_un_strangely_resembles_a_1992_un_speech_by_12yearold_severn_cullissuzuki.html
Posted by JS at 14:15