Climate change 'prophets, and projectors, and half-instructed meteorologists': the press found them amusing back in 1871 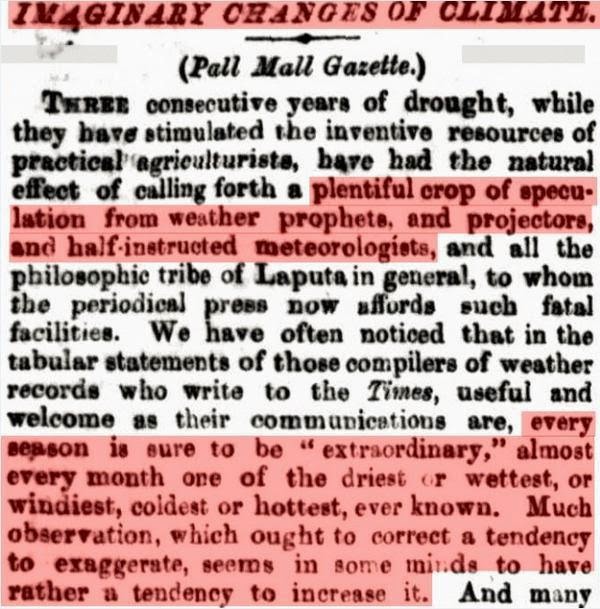 IMAGINARY CHANGES OF CLIMATE
(Pall Mall Gazette)
THREE consecutive years of drought, while they have stimulated the inventive resources of practical agriculturalists, have had the natural effect of calling forth a plentiful crop of speculation from weather prophets, and projectors, and half-instructed meteorologists, and all the philosophic tribe of Laputa in general, to whom the periodical press now affords such fatal facilities. We have often noticed that in the tabular statements of those compilers of weather records who write to the Times, useful and welcome as their communications are, every season is sure to be “extraordinary”, almost every month one of the driest or wettest, or windiest, coldest or hottest, ever known. Much observation, which ought to correct a tendency to exaggerate, seems in some minds to have rather a tendency to increase it.

The cutting is from the THE BRISBANE COURIER, TUESDAY, JANUARY10, 1871.

Steven Goddard's blog Real Science is an excellent resource to find old press cuttings relevant to climate that would enhance many a school project by helping give the perspective which is so easily missed.

The above example would grace any project quoting any of today's 'half-instructed meteorologists' such as James Hansen (an astro-physicist) or Gavin Schmidt (a computer programmer) or Al Gore (no qualifications to speak of) as they take pains to persuade us that we are seeing "extraordinary" weather thanks to their pet obsession, carbon dioxide.  The press today, and now of course the broadcast media, are sure to give them 'fatal facilities' and have done so for decades, without even the sardonic challenge of the above quote.

Note also the calm assurance about the three consecutive years of drought.  Today, this would be amplified as a crisis, a a catastrophe, as a forerunner of doom to come.  Back in 1871, they merely noted that the drought would have 'stimulated the inventive resources of practical agriculturalists'.  Perhaps they were made of sterner stuff in those days.  Perhaps they were less readily panicked.  Perhaps we could learn from them.