Climate Cult Marches in New York and elsewhere on 21st September: the ill-informed and the ill-intentioned will call for more destruction

Climate alarm campaigners destroy morale in the young and other vulnerable groups by raising the spectre of imminent doom. They destroy educational ideals by turning classrooms into indoctrination centres. They destroy childhood innocence by demanding 'action' by the young, and using them as their political tools.
Some campaigners are ill-intentioned because of their hatred of society. The hard left, the deep greens, the bigoted and the malevolent. The climate scare merely gives them a new platform for their poisons.
(hat-tip for pic: Greenie Watch)

Some are surely innocents who want to good. They have heard that our CO2 is disrupting the climate and driving us towards disaster, and some may even think the disaster is already underway when they hear claims that droughts, floods, hurricanes, tornadoes, and other harmful phenomena are much worse than they used to be.  They are too easily led.  They are being taken advantage of.

It would be a whole lot healthier if we had marches and protests against what Paul Driessen has called the 'climate change scientist-government-environmentalist-industrialist climate complex'.

Not a very snappy label, but as he notes,this 'complex' is 'well funded and powerful. But it is also arrogant and dishonest, and its assertions are so far removed from reality that they can no longer survive scrutiny and challenge.'

'The time has come to end its attempt to control our lives, livelihoods, liberties, living standards, and life spans.' 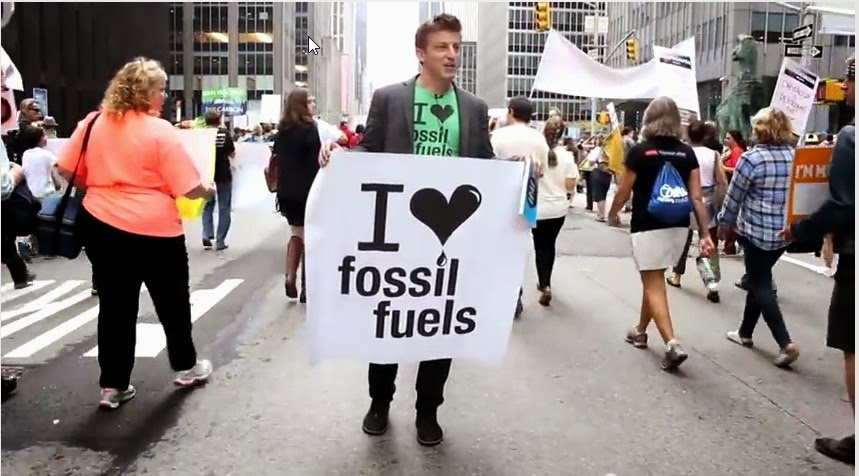 Here is an example of a child being used as a political weapon on the march in New York:

This pic and many more at: http://grist.org/climate-energy/meet-a-climate-marcher/

And another example of this exploitation of kids:

If you really want insight into just about anything at all, get a statistician to take a look at it.  Here are some insights from Matt Briggs who took a look at the march in New York, and tried to engage with some of the marchers: http://wmbriggs.com/blog/?p=13644  Basically, he found a lot of people who did not really know what they were supporting, but came along anyway.

For the hard-left (and billionaires) at the march, see: http://donsurber.blogspot.co.uk/2014/09/commies-and-billionaires-march-against.html
and: http://www.theblaze.com/stories/2014/09/21/f-the-police-communists-radicals-spotted-throughout-climate-march-in-new-york-city-demand-revolution-nothing-less/

A report on the London march, and the mess the marchers left behind them: http://www.breitbart.com/Breitbart-London/2014/09/22/Climate-March-London-Piles-of-Placards

Note added 24 September 2014 Report from the San Francisco Oakland rally on 21 Sep (hat-tip WUWT) The hard-left dominated this event.  How sad to see such a spectacle in the land of the free! Lots of picture here: http://pjmedia.com/zombie/2014/09/23/climate-movement-drops-mask-admits-communist-agenda/  For example:

and 'Children were encouraged to hang out in the protest’s kid-friendly zone, where they could draw their own signs promoting “revolution.”'