Cry Wolf! about climate and watch how the money rolls in. Scare 'em and snare 'em, kids and all.

The headline is from an article in The Telegraph way back in 2004.  Well worth reading the article in full, and well worth reading the academic paper it was triggered by.  The problem is still with us in 2012, as evidenced by this post on WUWT.  Anyone wanting to trace how, why, and where scaremongering materials for schoolchildren about climate change have been produced in recent years, will surely want to investigate the deliberate promotion of scare stories by fund-raisers as one contributing factor.

Here is how the Telegraph article begins:


'Environmental charities are exaggerating the threat of climate change in an attempt to raise more money from public donations, according to a report by Oxford University academics.

The charities, including WWF-UK, the world's biggest independent conservation organisation, claim that a quarter of the world's species are facing extinction by 2050.

However, the report says that this is a "woeful misrepresentation of the underlying science".
Many species said to be at risk - including the red kite and the Scottish crossbill - are not facing imminent extinction, according to the report by four academics from the biodiversity research group at Oxford's school of geography and the environment.'

Here is how the article ends:

'Dr Richard Ladle, a theoretical ecologist at Oxford University who also contributed to the report, said that most species cited as being in danger of extinction by 2050 "probably won't be".

Dr Ladle said that WWF's response to criticism of the claims was that the ends justified the means.
"Our argument is that we don't think the ends do justify the means because if you are hyping something to that extent, you are going to have the equivalent of 'compassion fatigue' in the charity sector.

"Biodiversity is declining worldwide, but if you keep telling people that we're on the verge of a global disaster, and then the process takes longer than people think it's going to take, we are going to be in trouble and the non-governmental organisations are going to be in trouble in terms of their funding.
"Change in diversity takes a long time. My gut feeling is it will take a lot longer than 2050."

However, a spokesman for WWF-UK insisted that it was unfair to judge fundraising in the same way as academic research. "Climate change is real and it endangers species," he said.  "But you have to simplify issues for appeals. There is no way you can cover all the science. Fundraising appeals are very emotional."

Bryony Worthington, a climate campaigner for Friends of the Earth, said: "The biodiversity research group cannot really claim that it constituted crying wolf, as there is potential for the worst-case scenarios to be realised." '

The moral turpitude of the campaigners is nicely revealed by that last quote: since there is always potential for fire in a crowded theatre, shouting 'Fire!' there is not an unreasonable thing to do - just think of all the lives you might save.  This young woman went on to be a key labourer in the rushed drafting of the UK's Climate Change Act, passed in 2008, a chore for which a grateful government elevated her to the House of Lords as a baroness.  The careless ignorance of that government is illustrated not just by the appalling nonsense of that Act, but also by its drive to scare the public and push climate alarmism into schools through, for example, distributing copies of Al Gore's drama 'An Inconvenient Truth' within which 'truth' is rather hard to find.  Their scary tv ad features in this dismal catalogue of propaganda efforts collated by the Washington Post.

The WWF was once held in high esteem for trying to do good works for wildlife around the world.  Now it is not so regarded by those who have seen the harm it has done through its relentless campaigning around climate.  It became a vehicle for the politically ambitious, providing what are now huge budgets for interfering in the affairs of many countries without being accountable to their electorates.  A recent report in Der Spiegel, highlighted here by Donna Laframboise, suggests that its reputation is about to fall even further or more widely: 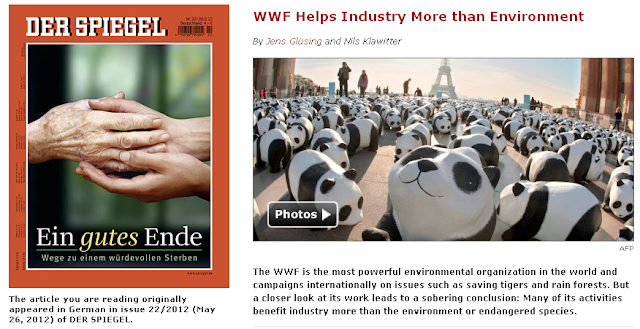 Laframboise begins her comments with this:
'A splendid and disturbing investigative feature in Der Spiegel explains why the WWF doesn’t deserve your charitable donations.'


I completely agree.  It has, in my view, done a great deal of harm to society - not least through contributing to the scaring of children - and, incidentally, it has harmed wildlife too according to the Der Spiegel report (quote 'Undermining its own standards seems to be a specialty of the WWF.')

Meanwhile, one of the chief agents of the WWF's fundraising strategy, one Robert Napier, went on to become, in 2006, Chairman of the UK's Met Office.  Why would he do that?  Why would anyone hire him to do it?  What, in others words, were they thinking?  And what, of late, has been happening to the reputation of the Met Office?  Here is a tv clip highlighting their 'lamentable performance' with some vigour on, of all places, the BBC in 2010.  Here is an article in the printed media from 2011.  Extract: 'First it was a national joke. Then its professional failings became a national disaster. Now, the dishonesty of its attempts to fight off a barrage of criticism has become a real national scandal. I am talking yet again of that sad organisation the UK Met Office, as it now defends its bizarre record with claims as embarrassingly absurd as any which can ever have been made by highly-paid government officials.'   Here is a blog post from 2012: 'Met Office forecasting produces another epic failure.'

Meanwhile, in 2009,  a blogger wrote this on the BuyTheTruth site:
'The UK Meteorological Office, whose Hadley Centre runs the IPCC scientific assessment (“Working Group 1”), is now a department of the UK Ministry of Defence [as of 2011, it is no longer there]. And its Chairman is none other than Robert Napier, a green activist and alarmist with tentacles into some of the world’s most powerful drivers of climate alarmism and social control.'  [please see the rest of that post for chapter and verse on this.]


Climate alarmists, and those who can see advantage in such alarm, are embedded in 'the establishment' and in many major 'charities'.  We ought to be dismayed at what this has led to in terms of actions and materials designed to scare the young and recruit them to a political cause, but we no longer need be surprised by it.

To end on a more positive note, here are some words by Richard Lindzen in 2001 (as quoted here):
“The question of where do we go from here is an obvious and important one. From my provincial perspective, an important priority should be given to figuring out how to support and encourage science (and basic science underlying climate in particular) while removing incentives to promote alarmism. The benefits of leaving future generations a better understanding of nature would far outweigh the benefits (if any) of ill thought out attempts to regulate nature in the absence of such understanding.”

[Note added 20 October 2012:  The puzzling appointment of Robert Napier as Chairman of the UK's Met Office came to an end in September after six years.  A self-serving reflection on his time there can be found here: http://www.metoffice.gov.uk/barometer/people/2012-07/ready-steady.]

Great to see your blog up and running!

I put a link on SCEF.

I was just looking through the list of organisations involved in energy and climate in Scotland and it really is eye watering how much money is rolling about. There is almost no organisations who haven't got their snouts in the trough.

Just realised that you are not the blog of someone who left our group and went off to form up by themselves. I eventually did find it, and there is only one post.

Still it is a good blog! So I shall leave a link on our association list of links

Thanks Mike. Appreciate the link! Mike has recently launched the Scottish Climate and Energy Forum, and has a superb site for it here: http://scef.org.uk/ .