Climate science in Australia schools: 'Not teaching, but abusing'

'Geophysicist Michael Asten is astonished that climate science is taught in schools as an exercise in groupthink, with sceptics not disproved but abused: 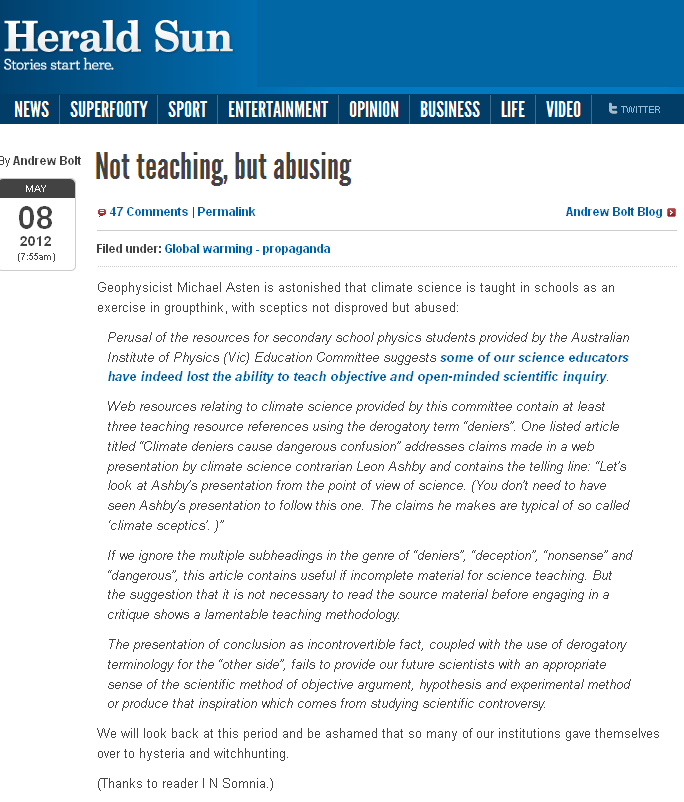 Climate Nonconformist, who is also in Australia, adds some recollections from his own school days:

'I remember my year nine science text-book doing a similar thing with the moon landing conspiracies; giving the conspiratorial argument alongside a scientific reply. The difference is that - to my knowledge anyway – there is no scientific reply by the conspiracy theorists. This hatchet job on Ashby makes a mockery of science by excluding one side of the argument and forgetting that science is defined by debate. Students are being sucked into this fallacy that science is unquestionably authoritative and one-sided.
In my Environmental Science classes, only one lesson was devoted to the other side of the debate. Our teacher merely informed us that there was another point of view, and showed us a video featuring Andrew Bolt. A token gesture. The rest of the course was dedicated to renewable energy, greenhouse theory, energy efficiency and alarmist outcomes, while ignoring the key parts of the debate; namely the hockey stick controversy and climate sensitivity.
We were uncritically shown Al Gore’s now debunked movie, forcing us to sit through the hysteria and self-adulation the former vice-president engaged in. We were told that the film contained errors, but none were specified. This is unfortunate, considering the deception surrounding the Vostok ice cores. For high school students, it is difficult to critically evaluate what appears to be irrefutable evidence of man-made global warming, especially when we’re dissuaded from questioning “the science”. The concept of causation did not occur to anyone. For us, this was proof.
The precautionary principle was taught as though it was scientific idea, rather than as the flawed approach to policy-making and environmental propaganda that it is. We learned about the potential beneficial uses of organisms, something which I now realise provides environmentalists the excuse the preserve every possible species, justified on the off-chance they might hold the cure to cancer or something like that. Together, these two ideas provide the green crowd with a potent tool to prevent industrial development. Of course, I couldn’t see through that at the time.
On the plus side, I did have one science teacher who was dismissive of global warming alarmism.'

The comments on the Andrew Bolt article are overwhelmingly from readers outraged by this reported abuse of education, and/or adding experiences of their own or their children's.  For example here is a selection scattered over the three (currently) pages of readers' comments:

Sadly this travesty has been endorsed by a large swag of science education gatekeepers in a wide range of education jurisdictions including the national curriculum.

Of course, Australia is now a post-modern post-scientific culture as witnessed by the failure to sack Tim Flannery over his blatant failure to accept responsibility for misleading statements about AGW.

My son encountered this first-hand when his class had to study ‘An Inconvenient Truth’. When he challenged some of the claims made in the film, he was threatened with detention.
When he produced a printout of British High Court judge Mr. Justice Burton’s ruling on scientific errors and political activism in the film, it was thrown in the bin.

When you have children leaving school who are barely literate, who can hardly speak English but some sort of modern pidgin and who couldn’t care less about school in general we see that the educators have done their work well. You can’t control people who can think.
Where is the Victorian Premier in all this? Is he unaware of what his education department is incorporating into the syllabus? Where does the responsibility for factual science being taught lie? This is an outrageous highjacking of the education system. In future years those same children will be wearing the consequences of this scam against the people and will know who to thank for it.


Indoctrination - designed to close minds down and instill “unquestionable beliefs”.
This is simply an abuse of children.

Having just finished high school and studied physics, i have to say this is pretty spot on, sceptics in my class were told either “you’re wrong” or “the argument isn’t so much whether we can afford to believe it but can we afford not to?” in other words this might be totally wrong but we should believe it so the world might not end. Sigh.


Note added 10 May 2012.  That article by Michael Asten on climate education is available in full here: http://www.climaterealists.org.nz/node/885  Extract: 'The interested student, however, will discover material that may illustrate larger problems in science education. Perusal of the resources for secondary school physics students provided by the Australian Institute of Physics (Vic) Education Committee suggests some of our science educators have indeed lost the ability to teach objective and open-minded scientific inquiry.'
Posted by JS at 11:13

I work for a government agency that has many "supposed" expert in climate change working for them. At first I felt comfortable to speak out, now I just roll my eyes because I can't be bothered being made out like an idiot because I don't believe in climate change.

I guess you are using 'climate change' to refer not to the incontrovertible reality of a climate system that has never stopped changing and never will, but rather to some politically-encoded use of those two words. 'Climate change' is a platitude, just as 'man influences climate' is. Many people seem to regard these platitudes as revelations brought down from high on tablets of stone by the IPCC, and are this inclined to take that rotten body more seriously than it deserves. I guess your colleagues may be like that. Your opportunities for teasing them must be legion, but I appreciate that you will need to take care given the odium and career-damage that can be heaped on non-believers in a climate catastrophe due to CO2.