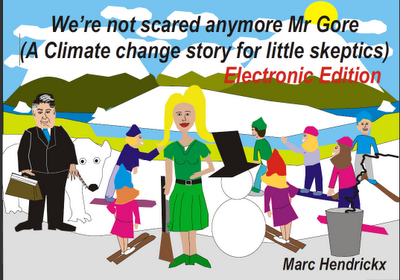 You can get your copy here: http://www.users.on.net/~kerryandmarc/not%20scared%20anymore%20Mr%20Gore%20EE.pdf

The story shows Mr Gore being welcomed to a classroom, making some of his points, with each of them being refuted by the children.  Eventually, Mr Gore flees.

Some background on the author:

'Marc Hendrickx has worked as a geologist since completing a BSc (Hons) at Latrobe University, Australia in 1993. His work has included making geological maps for government geological surveys in the Victorian Alps, the deserts of central Australia and in the dry plains of Western New South Wales. Since 2001 he has worked as an engineering geologist specialising in transport infrastructure. At the time of writing he was undertaking a PhD at Macquarie University.  As a geologist Marc sees the effects of natural climate change written into the rock record every time he steps onto an outcrop. He doesn’t need a computer model to tell him the climate’s changing.  The path to a sustainable future will not be born from fear.  Open your eyes and set yourself free.'

Note added 16 Sep 2013: the above link to get a pdf copy of the storybook no longer works.  You can see a fairly clunky version on YouTube here: http://www.youtube.com/watch?v=DW9_RkHlz2Q
Posted by JS at 14:38

Very good, but in reality Gore wouldn't have hung around till the end. The YouTube clip of him making a swift exit from the US bookstore proves that!