Feed kids a constant diet of climate anxiety; some commit suicide, some turn to radical activism, some choose to become vegans or withdraw from life or vow to never bring children of their own into what they believe will be a ruined world.

The solution is obvious. Stop frightening the children.

The AGW climate scare is notable in that it has been vigorously adopted by the left, under the guise of caring for the environment, in a way which reflects their transition from being in favour of industrial progress to being against it, and from being concerned with the 'working man' to being convinced the planet would be better off without 'him'.

Here is a post from a couple of years ago on the butnowyouknow blog that I think would make interesting reading for any youngsters startled or scared by the AGW alarmism, and perhaps encourage them to dig into it a little more deeply, while refusing to be intimidated by the clamour in the meantime:

Cassandras are becoming
increasingly apprehensive,
for the weather
aberrations they are
studying may be the
harbinger of another
ice age 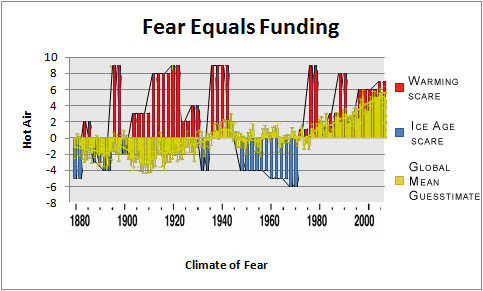 The actual Global Warming Advocates' chart, overlayed on the "climate change" hysterics of the past 120 years. Not only is it clear that they take any change and claim it's going to go on forever and kill everyone, but notice that they even sometimes get the short-term trend wrong...
Worse still, notice that in 1933 they claim global warming has been going on for 25 years…the entire 25 years they were saying we were entering an ice age. And in 1974, they say there has been global cooling for 40 years…the entire time of which they’d been claiming the earth was getting hotter! Of course NOW they are talking about the earth “warming for the past century”, again ignoring that they spent much of that century claiming we were entering an ice age.
The fact is that the mean temperature of the planet is, and should be, always wavering up or down, a bit, because this is a natural world, not a climate-controlled office. So there will always be some silly bureaucrat, in his air-conditioned ivory tower, who looks at which way it’s going right now, draws up a chart as if this is permanant, realizes how much fear can increase his funding, and proclaims doom for all of humanity.

Next time you see the usual "global warming" chart, look carefully: it is in tiny fractions of one degree. The ENTIRE global warming is less than six tenths of one degree. Here is the Global Warming Advocates' own chart, rendered in actual degrees like sane people use. I was going to use 0-100 like a thermometer, but you end up with almost a flat line, so I HELPED the Climate Change side by making the temperature range much narrower, and the chart needlessly tall to stretch the up-down differences in the line.'

This site illustrated their report of the above timeline with this graphic: 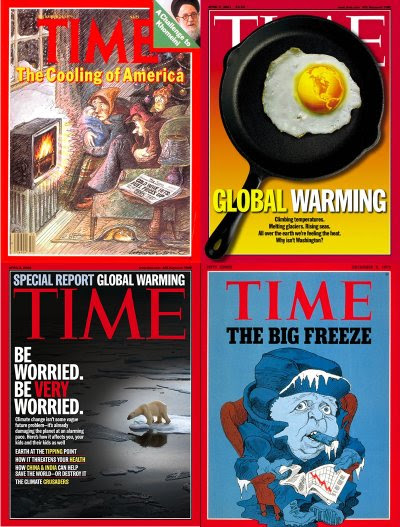 It would make an interesting project for a class to start collecting ice-age/cooling scare stories from the media since 2008.


Note added 25 March 2013.  There have been quite a few such stories.  Here is a 'new ic age coming' one from Germany:  http://notrickszone.com/2013/03/25/flagship-daily-die-welt-stuns-germany-scientists-warn-of-ice-age-cites-new-peer-reviewed-russian-study/
' For example veteran journalist at German flagship daily Die Welt today has stunned the rest of the German mainstream media with a piece titled Scientists warn of ice age.' 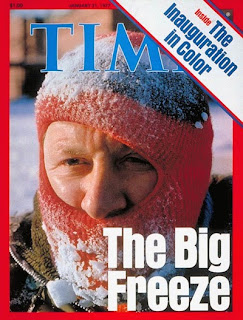 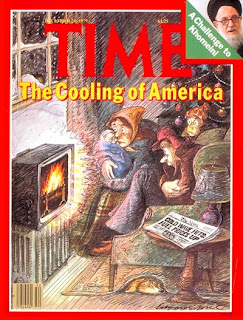 Good set of links on the cooling scare of the 1970s: http://www.populartechnology.net/2013/02/the-1970s-global-cooling-alarmism.html