Josh has the story at Bishop Hill:

''Subsidy Sam' was written by Lyndsey Ward to counter the shameless pro-wind propaganda allowed in schools. Lyndsey asked me to help out with a cartoon and I was only too happy to oblige. Today 'Subsidy Sam' made it into The Press and Journal, a Scottish newspaper'

On her the Facebook page, Wind Energy's Absurd, Lyndsey writes:
'This short story has been written to counter the shameless wind propaganda that is allowed into our schools to influence young minds with no effort to show the other side.
Here at Wind Energy's Absurd we have repeatedly challenged the wisdom and morality of allowing multinational companies into the classroom to put their side of a story that is designed to cultivate acceptance of their industry into future generations.
You will remember Tommy the Turbine - a tale told to children in Ireland about the wonders of wind power.  http://www.tommytheturbine.net/    http://tommytheturbine.com/


Well now Tommy has a rival - and our money is on Subsidy Sam getting the message out there.
It is time the indoctrination of our children was stopped.'

Hear, hear to that!
Lyndsey is based in the Highlands, where the regional Council has long been complicit in pushing eco-junk on to children.  This picture shows kids from a school which opened its doors to that nasty multinational, the WWF, back in 2012. 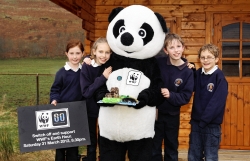 From the Climate Lessons post at the time:
'These children from a rural school in Scotland have been encouraged to switch lights off on 31st March, in order to 'support people and wildlife threatened by climate change'.

It is not difficult to spot the political campaigners who are coaching them in this nonsense. And a regional council is on-board too, claiming that it 'hopes the effort will make people think about the energy they use, where it comes from and the impact that has on the environment and climate change.'
(Source: Ross-Shire Journal)

Of course, the council and WWF are busy scheming to make that energy more expensive and less reliable thanks to the windfarms that are popping up in their territory to destroy wildlife, industrialise wild places, and discourage visitors and sensible industries from going anywhere near there.  Meanwhile, it is quite disgraceful that wealthy, un-accountable, biased,scaremongering, self-serving schemers like WWF have been allowed such access and influence on those youngsters.'

The 'Subsidy Sam' story has also been picked up from the Bishop Hill post by another excellent organisation, Scotland Against Spin.

It is good to see people fighting back against the waves of propaganda that children have been subject to for decades.

Back in 1999, the problem was already clear to some:

'#1999 USA 'Shortly after Earth Day in 1997, for instance, a parent wrote a letter to the New York Times: "I have noticed a disturbing trend. With each passing school year, my children are more convinced that humans and technology are bad for the planet....While teachers are helping to insure a ‘greener’ future, I do not think they understand that children may infer a condemnation of humanity."'
http://cei.org/news-letters-cei-planet/too-much-fear-too-few-facts'

[an entry in 'Climate Anxiety: reports of frightened children']

P.P.S. Here's an update on that first Earth Day, and its awful stupidity: http://dailycaller.com/2016/04/22/7-enviro-predictions-from-earth-day-1970-that-were-just-dead-wrong/  Truly, we need to protect children from such twisted, irresponsible, malevolent junk.

Note added 10 May 2016:  On the topic of windpower, some adults are making good progress in exposing the lunacies  and reducing the damage:  http://notrickszone.com/2016/05/09/major-blow-to-wind-power-bavarias-highest-court-upholds-10h-rule-shoots-industrialization-of-idyllic-landscape/  'The ruling represents a major landmark victory for wind energy opponents, who have been increasingly shocked by the rampant destruction of Germany’s countryside and natural landscape. They greeted the ruling with loud cheers.'

As the anti wind facebook page which Lyndsey Ward chose to publicise Subsidy Sam, along with the Bishop Hill Blog and What's Up With That? via Josh, we are delighted to see - as we've said on WUWT - that Subsidy Sam is flying round the world...because he never did much before except liberate his component parts.

Can we make one slight amendment, though. Lyndsey is a regular contributor to our page but stays fiercely independent and works independently of any groups.

However, as she is such a hugely successful and hard-working campaigner, not only for the Highlands but for everywhere else which faces the scourge of wind, we are happy to support the work that she does and again offer our congratulations to her and to Josh for a superb piece of work.

Many thanks for the clarification. I've edited the post to reflect it. By the way, well done to you folks as well for all your good work.

Many thanks for the edit and for your kind words.

Subsidy Sam has had a bit of a makeover, with more cartoons by Josh and is available as a PDF on Josh's site www.cartoonsbyjosh.com.

He has been reborn to herald a new children's story by Lyndsey Ward, again with cartoons by Josh, which is due to come out in August