More Climate Junk Launched into the Biosphere: a concerned citizen spots it, but not in time to prevent widespread dispersal 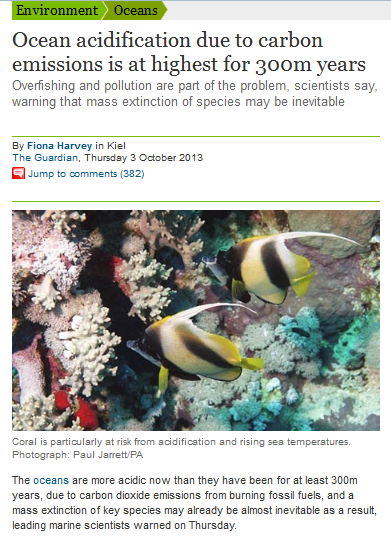 The headline is bad enough, since it is not true, but the first words of the article are even worse: 'The oceans are more acidic now than they have been for at least 300m years, due to carbon dioxide emissions from burning fossil fuels, and a mass extinction of key species may be almost inevitable as a result ...'

These are words to delight the activist.  What campaigner for hearts, minds, and wallets on the climate bandwagon could fail to be moved by them.  Another scare!  Yippee!!  Let's get it out there!!!

But, but, ... said a concerned citizen, noting the nonsense, it is just not true.  Ruth Dixon wrote it up on her blog, contacted the journalist and newspaper involved, and a few days later both the headline and the first sentence were changed to make them less misleading.  So that's good.  That was relatively quick.  Similar nonsense over ice disappearing on Kilimanjoro, glaciers disappearing in the Himalayas, polar bears disappearing in the Arctic, snow being a thing of the past in the UK, New York City streets soon to be under sea level, and such like all attributed to 'burning fossil fuels' took months or years to get corrected.  Even now, who would bet against finding some or all of them being found in materials intended for use in schools?

So the question is, how long before we see this latest one there as well?  It is well-suited for scaremongering after all: acid is scary, the entire ocean is dramatic, the threat of 'mass extinctions' ideal for getting the attention of the young.  Ruth Dixon has noted that the original spin by the journalist has been twittered round the world, as well as being studied by Guardian readers.  It is interesting to note some of the gushing tweets she has captured were from scientists, including this one who describes himself as 'a deepsea biologist, passionate about the oceans'.

As noted by Dixon, the Guardian did eventually edit both the headline and the offending first sentence to reflect the reality that the source of all this was referring to the rate of acidification.  Or, more accurately, to the rate at which the oceans are becoming slightly less alkaline.  Whether that rate is really remarkable is another matter, but one thing seems agreed at the source linked to by Dixon (loc cit): the oceans have been appreciably less alkaline for much of the past 300 million years:

And, as illustrated in a well-known graphic reproduced here, CO2 levels were typically over 1,000ppm for much of that time:

Whatever, we now have another piece of climate junk in circulation.  Keep an eye out for it coming your way.  If you see it being aimed at children or teachers, please let me know and I'll add the details here.

Hat-tip re the Dixon post: Bishop Hill, http://www.bishop-hill.net/blog/2013/10/7/oceans-are-unprecedentedly-alkaline.html
Posted by JS at 19:35