Climate Teachers: don't add to the rotten legacy of the environmental movement

Environmentalism has a rotten legacy.  The climate scaremongering is part of it.

(1) Have you checked for yourself  the materials you use to teach about climate?

Teaching children that they face climate catastrophe, or even serious and imminent threats, due to rising levels of carbon dioxide is such a momentous decision that surely any conscientious teacher will at some stage do some checking of his or her own as to the credibility of such assertions.  The journalist Melanie Phillips did just that, and she was not impressed with what she found.

This article appeared today in Greenie Watch attributed to Melanie Phillips but without a source-link.  It looks like it could be her work to me, and so I am tentatively reproducing it as such here: I have not yet found the article at source, but the above image as published has this i.dailymail link:
http://i.dailymail.co.uk/i/pix/2013/05/07/article-2320940-19AB0B18000005DC-854_634x407.jpg
Note added later same day: I have tracked the above article down.  It appears without any explanation in this article, which though very moving and important, is not about climate.  I presume it is included because it is in the book just published by Phillips.  A recent article by her on climate is here.

(2) Meanwhile, the campaign continues at high levels and low:

(2.1) Outrageous scaremongering (aka 'climate diplomacy') this month at the UN: 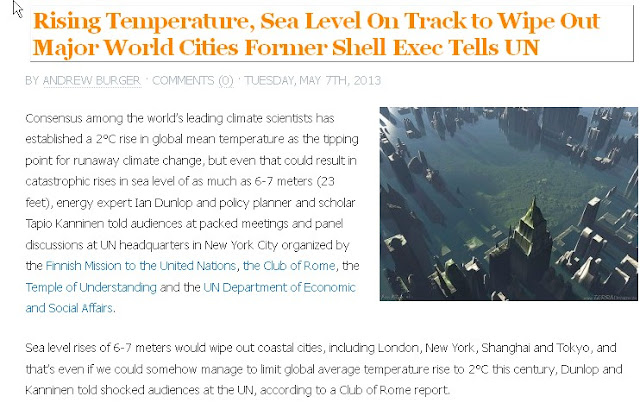 Note added 12 May 2013.   Collectors of examples of over-the-top alarmism will appreciate this one from 1881: linking up telegraph wires around the globe will cause catastrophe.  Description and commentary here and here.

(3) And for what?  To contribute to the already rotten legacy of environmentalism?

The Rotten Legacy of Environmentalism

Under each of these sections taken from the site Bread and Butter Science (created by James A. Marusek) can be found links to examples of harm:

Loss of a Dependable Electrical Infrastructure

The Agents of Fear

Development of the "Precautionary Principle" into a Fear Distortion Tool

Tying National Security Up in Knots

Depriving Workers of Their Livelihood

The Law of Unintended Consequences

The Destruction of Credible Science by Promoting Junk Science

The Destruction of Scientist who disagree with the Environmental Agenda

Promoting a Small Utopian World for the Elite through a Population Control Agenda (Isn't this called Genocide?)

Sponsor of Terrorism in the Name of the Environment

School Indoctrination: Driving Fear into the Hearts of Our Children
and here are the first few links in this last category:

There are dozens more, including a couple to Climate Lessons posts I'm pleased to say.

So, next time you hear the apologist refrain about it doesn't matter if the theory is wrong, it is leading to good things anyway, you might want to dig out this list and share it around.