Climate Teachers – how do you deal with the fact that there is no evidence that dangerous global warming is occurring?

That statement above seems clear and explicit enough to be contradicted very easily if the science of catastrophic anthropogenic global warming is truly settled.  But it won't be contradicted because it can't be: there are no observations of temperatures, of storms, of ice, or sea level, etc etc that show cause for alarm over anything extraordinary happening.  [The quote comes from a recently published report,  linked to below, from climate experts in Australia (hat-tip Greenie Watch).]

Given that observations are not there to show dangerous global warming is occurring, what is causing all the fuss?

All we have are computer models programmed to give each additional bit of CO2 a warming contribution at the surface of the Earth, and theory which says that that by itself should produce effects that we would have the greatest difficulty in discerning against the many other sources of variation in the climate system.

For example, a doubling of CO2 levels might produce no more than 1C increase in the computed global mean temperature, and quite plausibly 0.5C or less.  No cause for alarm there.  In fact, such a modest warming would be overwhelmingly beneficial given what we know of relatively warm spells in the past such as the Medieval Warm Period and the Roman Climate Optimum.

Now such good news, funnily enough, does not bring with it a need for increased state power, nor more power for the UN, nor more funds for what used to be primarily wildlife conservation or humanitarian organisations, nor more clients for crisis consultancies, nor more platforms for political extremists bent on destruction.

Imagine that!  No starvation caused by using farmland to make fuel  for vehicles instead of food for people, no scary pictures of flooded cities to scare us, no children being told that polar bears will die unless they make their parents turn down the heating, no crippling of industrial development by discouraging conventional power stations around the world, no energy cost increases due to subsidies for renewables and no damaging of the environment to make way for them, make them, and live with them.  And no more jobsworths and consultants going on and on about that bizarre notion, the carbon footprint..

So, given that the actual weather, ice, and sea-level records show nothing extraordinary about the last 50 years or so, and given that the basic theory is for a modest increase in temperatures due to more CO2, where is the problem?

It lies inside those computer models.  They display a positive feedback which amplifies the effect of the CO2 to produce far larger temperature increases.  Far larger than have been observed so far - not least since we have seen no overall increase at all over the last 10 to 15 years, let alone any rising trend in line with model projections.

These models have some practical value in extrapolating from and interpolating amongst observations of existing weather systems over a few days, not least because they can be frequently re-adjusted as new observations come in.  That is weather.  On climate, they have had no practical value whatsoever, and may be so misleading that we'd actually be better off without them.

Even their owners and operators admit they are not fit for predictive purposes, and can only be used to provide illustrations of what might possibly happen under various assumptions.  Illustrations which have failed to reproduce important features of past climates when used retrospectively.  They perform poorly on temperatures, and worse on everything else such as precipitation.  You would not want to bet your shirt button on them, let alone your entire way of life.

But let us go back to Australia, and this recent report (pdf) by Bob Carter, David Evans, Stewart Franks & William Kininmonth published by Quadrant Online.  It is entitled


What's wrong with the science?

Is there any substantive new science in the science agency reports? No.
Is there any merit in the arguments for dangerous warming that are advanced in the reports? No.
Did any mainstream media organisation question the recommendations in the reports in their mainline news reporting? No.
Was there any need for, or purpose served, by the reports? Yes, but only the political one of attempting to give credence to the impending collection of carbon dioxide tax. 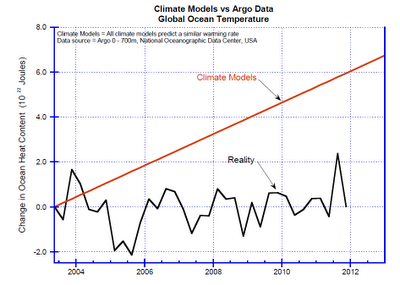 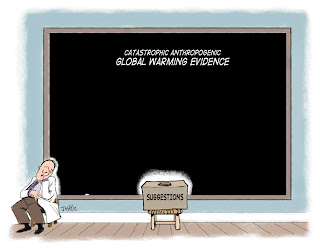