'According to Wrightstone, we should be communicating to young people that life is better than it’s ever been before. Earth is thriving, prospering, greening and benefiting from that growth. We have longer life expectancies; our food production is outpacing population growth. Air is getting cleaner. Our water is cleaner. Droughts and fires are in decline. Humanity and the earth are thriving and prospering which is in contrast to what we are being told and we just don’t see it. There’s an unrelenting barrage day after day of incorrect information that fits political ideologies and narratives, but it just isn’t correct science.'

Harpist Decides The Children Must be Told: and so another scary climate book for kiddies hits the streets 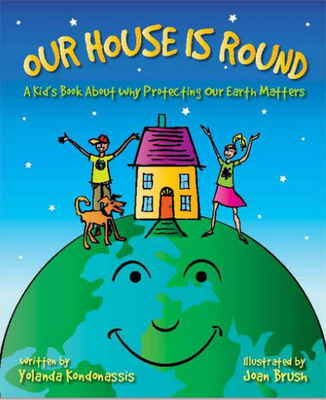 The book has been read, partly reviewed, and roundly condemned by Alan Caruba:

'The author is not a biologist, a geologist, a meteorologist, or any other kind of scientist. She is a Grammy-nominated classical harpist. A harpist!

“Our Earth has gotten messy. What should we do?” she asks her young reader. What does she mean by “messy”? Her answer is that “cars, trucks, and factories make pollution, a kind of dirty gas or liquid that goes out into the air and into our rivers, lakes, and oceans.” This book is written for children age five to nine!

Imagine now what it must be like to be that age and be told that the air is polluted and the water is as well. This verges on child abuse.

“Pollution goes up into the sky and forms a blanket of gas that holds heat within Earth’s atmosphere. That makes our whole Earth warmer and leads to unclean air for breathing, melting polar ice caps, rising sea levels, and extreme weather patterns. Scientists call this warming of our Earth’s temperature CLIMATE CHANGE.”

It is a LIE. The Earth has been cooling for fifteen years.

Carbon dioxide is not a pollutant. It is a gas as vital to all life on Earth as oxygen is to the life of living creatures. Without it, not a single blade of grass or tree or the vegetation we call “crops” would not grow. Livestock and wildlife depend on that vegetation. If you are age five to nine, you likely are unaware of this.

This book and all the others that incorporate these lies are a form of psychological terror.'
(hat-tip: Greenie Watch)

The book was published in 2010, and the site promoting it includes an interview with the author, Yolanda Kondonassis, from which I have taken this extract:


'Q: This book is more plain-spoken than most kid’s books about what causes environmental problems. Was that a conscious decsion?
YK: Very conscious. I have a huge amount of respect for the intelligence and capacity of kids. I learned long ago that it’s almost always a mistake to talk down to children. They are refreshingly lacking in agendas so their minds are open in the most productive and observant way. They are also shockingly honest. If something doesn’t make sense, they will usually ask all the right questions and shine a spotlight on the blind spots of adults in about two seconds flat. I love that. Perhaps we should have a kids’ delegation Congress.
Q: In your book, you don’t avoid or tip-toe around the issue of climate change. Tell us about your convictions.
YK: It’s a pretty simple cause and effect equation. The problems facing our earth aren’t simple, but recognizing that we do indeed have problems should be pretty clear. I am big on metaphors so to use another one, I have found that at the beginning of a child’s cold or flu, there is always the temptation for parents to say “it’s allergies,” “he’s overtired,” “she had a long day,” “he’s overheated,” etc. For working parents, a sick child requires scheduling overhaul, missed obligations, and family upheaval. No one wants to admit when these disruptions are imminent. But most moms also know that glassy look in their kids’ eyes that says we’re headed into the sick zone for a few days. Our earth definitely has that glassy-eyed look and we need to admit it so we can get on with solutions. The goal should not be to slow the damage, but to reverse the trends'
Now it is arguable that the earth is far from having that 'glassy-eyed look', but is actually in vigorous good health.  It is not the sickly, vulnerable child that so many alarmed people seemed to suppose, but rather a grizzled, remarkably robust ancient.  As for air quality and water quality,  these have been improving this past century hand-in-hand with industrial progress, and it is the continuation of that progress which holds out greatest hope for further improvements.  The glib 'environmentalism' of such as Kondonassis seems to skip over all that.  Let me finish with a quote from a book which I hope she will read one day if she has not already done so, 'The Rational Optimist' by Matt Ridley:
'The four horsemean of the human apocalypse, which cause the most premature and avoidable deaths in poor countries, are and will be for many years the same: hunger, dirty water, indoor smoke, and malaria, which kill respectively about seven, three, three and two people per minute.  If you want to do your fellow human beings good, spend your effort on combating those so that people can prosper, ready to meet climate challenges as they arrive.  Economists estimate that a dollar spent on mitigating climate change brings ninety cents of benefits compared with $20 benefits per dollar spent on healthcare and $16 per dollar spent on hunger.'
I suspect Ms Kondonassis may not possess this wider perspective.  She, like many other decent well-intentioned people, has probably been scared by the talk of a climate crisis.  And she, like a good many others, has decided to share that scare with children.  Here is how her book presents industrial progress to the very young: 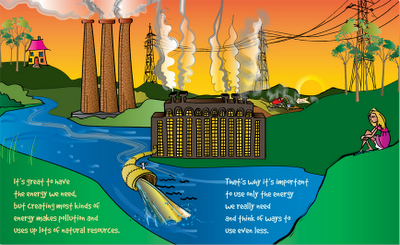 Negative or what?  And of course, the air and water pollution issues we face are primarily to do with inputs that no-one associates with 'climate change', such as carbon monoxide and sewage, and which have been dramatically reduced in industrialised countries.  Kondonassis' list - whole Earth warmer ... unclean air for breathing, melting polar ice caps, rising sea levels, and extreme weather patterns - is readily Fisked: the slow warming of the past 150 years or so seems independent of CO2 and has recently slowed down despite CO2 levels rising faster than ever, air quality has been improving at least in the developed world, Antarctica - the major icecap is not melting, the slow rate of sea-level rise has become even slower in modern times, and even the IPCC has stopped using extreme weather as a poster-child.  Perhaps if and when she realises these things, she will stop promoting the facile propaganda of climate alarmism.  If that should allow her more time for playing the harp, the world will become a little better as a result.