Climate Authorities: they don't need evidence - the debate is over, the science is settled, you must not question them, you are not worthy.

As showing now on Bishop Hill and on WUWT.
Greenie Watch compiler J J Ray with a relevant example:
'Warmists normally defend their beliefs by saying "The experts tell us" and speak of "The science" but never mention any actual scientific facts. But surely "The experts" themselves have some facts to put forward? Nope. I reproduce below the full screed put out by none other than "hockeystick" Mann in defense of his position. It too is full of accusations and complaints but references not one scientific fact. He claims that the globe is warming etc. but gives no evidence for that assertion. He can't, of course -- because it isn't. So it's no surprise that he doesn't even give a link to any report that would support his assertions.': http://e360.yale.edu/feature/climate_scientist_michael_mann_fights_back_against_skeptics/2516/
Some alarmist apologists have even argued that the 49 ex-NASA scientists, astronauts, and adminstrators were not qualified to speak out, as they did in their recent letter, about the work of climate alarmists still employed by NASA.  Here is an example in response to a comment on a blogpost:
'With all due respect, the signers of the letter are not intellectually qualified to critique the work of James Hansen and his colleagues at the NASA Goddard Institute for Space Studies, and the rest of the leading climate scientists.'
Of course, if you believe  'the debate is over' and 'the science is settled', then 'you must not question them' is not a big stretch in either moral or intellectual terms.
Three cheers for Josh!  He has their number and no mistake.
Posted by JS at 17:49 No comments: Links to this post

Climate Education: why are they lying to our children and terrorising them? 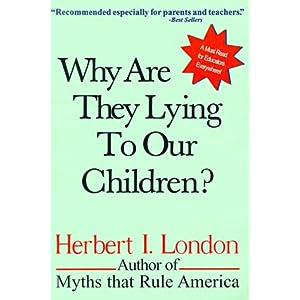 Herbert London's book 'Why Are They Lying to Our Children' is one I have wanted to post about for a while.  I just came across this article from the Australian site News Weekly of July 2011, and I reproduce an extract from it below.  It gives London's book a prominent mention, and some quotes from it.

The book was published in 1984 (of all years!, Orwell would be horrified at how his book has been used by some alarmists as a manual rather than as a warning).

The Australian writer below observes that 'things have only got worse in terms of Green alarmism' since then.

News Weekly, July 23, 2011
The Greens thrive on alarmist scenarios, hoping to terrorise people — even children — into giving up basic freedoms in the interests of supposedly saving planet earth. They have been doing this for decades now. Indeed, these Chicken Little activists have perfected the art of fear-mongering.

Today it is hyped-up alarmism over global warming. How quickly we forget, however, that a major campaign to convince us that global cooling was underway took place just a few short decades ago. Then there were nuclear winter panic campaigns, world starvation scenarios, and so on.

There are always scary gloom-and-doom scenarios being played out by Green activists who want to terrorise us into their agenda — an agenda which is usually about global governance (as Australian Greens leader Bob Brown reminded us again recently) and the diminution of human freedoms, if not of humans themselves.

I have written before about how many of these radical Green leaders want to cull humans, radically shut down economic growth and turn the West into a stone-age civilisation. Others have documented such social engineering gloom-and-doomism.

In 1984, Herbert London wrote a book entitled, Why Are They Lying To Our Children? In it he looked at how the classroom has become a battleground, as our children are being intimidated and threatened with a lot of Green agitprop.

He began his book in this way: “War, famine, environmental disasters, material shortages, and a declining quality of life — that’s what school children are being taught to expect in their futures. What these grim and mostly inaccurate forecasts are doing to their lives I don’t know for sure. But I do know this: Our children are absorbing excessively negative misinformation.”

It is not just all the gloom and doom that is harming our children. It is what they are not being told which is also so worrying.

London lists important facts left out of the school curriculum, “for example, that the wealthy nations play a constructive role in furthering world economics; that rapid economic growth has changed many non-Western nations from poor to middle-income status; that most resources are more accessible and less costly today than ever before; and that new forms of energy have been created. All these forms of progress are likely to proceed even more effectively in the future.”

In the more than 25 years since London penned those words, things have only got worse in terms of Green alarmism. They are just as anti-free market, anti-growth, anti-business and anti-freedom as ever, and they will latch onto any new scare-mongering pretext to push their agendas.

They really are anti-growth Luddites who want to take us back to a standard of living from which most of us have long ago gratefully escaped. And the developing nations, who want to catch up to the prosperous and free West, are also going to suffer from the Green panic-merchants.

But it is our children I especially fear for. Just as London reported on how our youngsters were being deliberately targeted back in the 1980s, it is the same today, if not worse. Consider a recent headline from a Sydney newspaper: “Australian kids are living in climate of fear”.

The article goes on to say: “Primary school children are being terrified by lessons claiming climate change will bring ‘death, injury and destruction’ to the world unless they take action.'

Emboldening of last sentence by me.  See the original (linked to in title above) for the rest of the article, and for more references.

Note added 16 Novermber 2012
Just seen this blog post from Samizdate which was in response to the above post and which contains some useful observations as well as some comments from others:  http://www.samizdata.net/blog/archives/2012/04/environmentalis_1.html
Posted by JS at 09:55 No comments: Links to this post