Calming the Climate Curriculum - rejoinders and 'Did you know?'s

There is an organisation called the Committee for a Constructive Tomorrow - CFACT.  It is actually optimistic about the possibilities for further progress without buying into the 'climate catastrophe due to man' cult.  How radical is that?  Imagine if that became the dominant leitmotif of curricula in schools!  Imagine the financial crisis facing fear-based fundraisers if cheerfulness and rationality broke out!

CFACT has just published (hat-tip NoTricksZone) a set of brief counter-arguments to some of the kinds of remarks that can trip off the tongues of those still convinced by the case for alarm over CO2.  Some examples:

'CO2 is a greenhouse gas and it has been rising steadily. How can you deny global warming?'

'Haven’t the past few years shown global warming to be worse than we thought?'

'How can you ignore thousands of scientists who say manmade global warming is a serious threat?'

'97% of scientists say manmade climate change is real. How can you go against them?'

'Don’t graphs show that current temperatures are the highest in 1,000 years?' 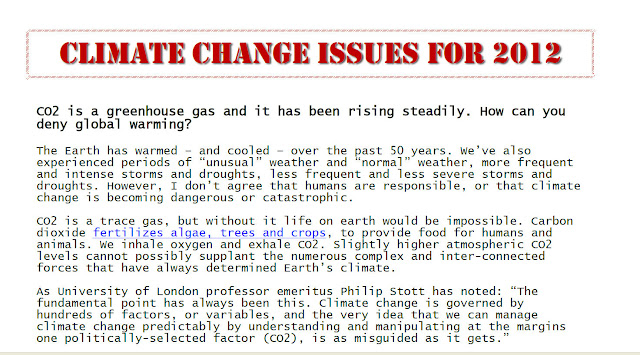 There are 8 pages in a pdf file of these questions and answers here: http://www.cfact.org/pdf/Climate-Change-Q&A-Truth-File-2012.pdf

When the exams are over, or if the mark schemes are tolerant of dissent, or if the pupils are otherwise not to be judged on their conformance to climate cult dogma, then this document could provide material for many displays for the classroom wall.  These could be used to encourage fact-checking and further investigations by pupils into these or any other remarks or assertions they may have encountered from those who want to scare them, and the rest of us, into thinking and doing what they want us to.

A promising initiative is also underway led by Anthony Watts at WUWT.  He has invited suggestions for 'Did you know X' tidbits that he could use in a forthcming presentations, as he explains:

Several hundred suggestions have been made in the comments, and not all of them of course are sensible or plausible.  But presumably in due course, Watts will winnow the wheat from the chaff and may produce something of interest for use in the classroom.

Supplement added shortly after posting
A Cambridgeshire councillor has attracted a great deal of very informed support for his sceptical position on CO2 alarmism.  One commenter provided him with a very interesting list of quotes, comments, and apercus from scientists who share that view.  The details are on Nick Clarke's blog here: http://nickclarkeconservative.wordpress.com/2012/10/22/climate-some-comments-from-scientists/

These also look like a very rich resource for classroom use.