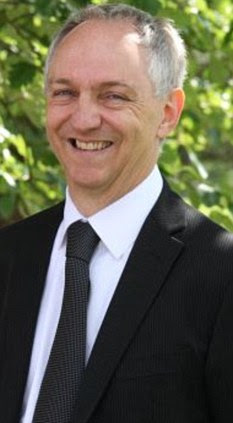 Quote from article 'The school's headmaster, Rob Benzie, shut down the radiators as an experiment to show students how the school could cut its carbon footprint.

''We turned off the heating as an experiment to see if we can lower our carbon footprint,' he said.

'We allowed pupils to wear as many jumpers as they liked and everyone seemed to be happy enough although it did get pretty chilly."


Then the children:
'Pupils at Ansford Academy in Castle Cary, Somerset, were forced to grip their pens through thick gloves and wear their coats and hats in class as temperatures dropped to 1C.'

And the teachers:
'One teacher said: 'It was absolutely ridiculous I have never experienced working in such cold conditions.
'I am all for saving the environment but to conduct an "experiment" as the head calls it on such a cold day is beyond stupid.
'The kids were complaining, no one was working properly some of them could not even write because they could not grip a pen through woolly gloves.
'We have a number of pupils with mental and physical disabilities here and they really struggled with the cold.
'It was unnecessary and in my opinion barbaric.'

And the parents:
' mother, whose 12-year-old daughter goes to the school, said: 'My daughter was physically shaking when she came home.'When I heard about this eco day I was absolutely furious.
'I wanted to take my daughter out of school but I was worried I'd get into trouble with the authorities.'

and
'One father said: 'I was just shocked when I found out what had happened.
'I have never heard of such a ridiculous idea. Turning off all the heating in December is just mental.

'The kids could get sick I can't believe any of them learnt anything.

'I know when I am cold I can hardly function. I'm absolutely furious with the school.'


Finally, the readers:
Here are the currently top-rated comments to the Daily Mail article from which the above quotes are taken:


Another idiot who shouldn't have any contact with impressionable youngsters.
- Tommy Cockles, Liverpool, 6/12/2011 7:18
Yet another eco-loony who thinks he can 'save the planet'. The planet can take care of itself, as it has done for billions of years.
- Owd Tyke, Devon, 6/12/2011 8:20
These are the teachers preparing the next generation for the work-place - Heaven help us! Typical leftie - more obsessed with a trendy ideology than teaching his pupils the three R's. These are the sort of people who ban religious instruction because they consider it superstition yet embrace with boundless enthusaism the new 'religion' of man-made climate change, which is pure fantasy.
- Gibbo, Stansted, Essex, 6/12/2011 7:20
What better way to teach children that climate alarmists are nutty?
- Casey, Maine, US, 6/12/2011 8:07
There is nothing more dangerous in life than a man (or woman) with a cause. Such people lose commonsense and it becomes impossible to reason with them
- Jeremy R, Sheffield, England, 6/12/2011 8:33
he is breaking the HSE rules on heating a work place.
- Geoff , Cleveland, 6/12/2011 9:15


I think I agree with all the top-rated commenters to this article in the Daily Mail.  Here is an example of someone who should not be in a position of such control over the young.  He clearly needs help himself to deal with his neurosis.  Inflicting it on others is not forgiveable unless he has completely lost the plot, in which case the failing lies with the education authority which continues to employ him.  His action does indeed seem to be illegal, as he has some duty of care.  The whole sorry business is a tiny example of the narcissistic inhumane authoritarianism of the 'green movement'.


And now the blogs.  This story has been picked up quite widely today, and by some widely read, influential sites.  Here are three of them:

(1) Instapundit
‘#GREENFAIL: Children left to freeze in the classrooms after head turns off heating on coldest day of year ‘to show how school can be eco-friendly.’ It’s a valuable lesson: “Eco-Friendly” just means “in the hands of the smug and sadistic.”
UPDATE: Michael Tinkler notes that at least nobody’s blowing them up. So far.'

Hippies hate kids. How else to explain their murderous, misanthropic meanness toward moppets?
A headmaster at a British school decided a great lesson in sustainability would be to turn off the heat for a day. In December:

Earth Goddess requires sacrifices
By Andrew Orlowski
Pagan gods traditionally required human sacrifices – preferably of children – and a West Country academy school appears to be leading the way. To give pupils a lesson in "sustainability" they'll never forget, headmaster Rob Benzie of Ansford Academy in Castle Cary, Somerset, ordered a "No Power Day ... as an experiment to see if we can lower our carbon footprint".

Added later still on 7 Dec 2011
WUWT is covering it too.  This sure is catching attention!
'The local school authority and parents should probably teach Mr. Benzie the lesson that freezing children to push a radical green agenda makes his job unsustainable, before he does something really stupid.'

Note added 8 Dec 2011
It can be instructive to look at the data.  Here are the values of Max and Min temp in degC recorded at a Met Office station in the same county as this school.  The data are for Yeovilton, and can be downloaded from here 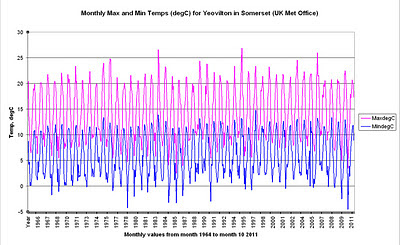 Whichever bit of 'global warming' was exercising the headmaster, it surely was not in SW England.


Note added 12 Sep 2013: the link to the original article in the Daily Mail seems to be dead.  Here is a much shorter report still up on Fox News: http://nation.foxnews.com/freezing/2011/12/06/kids-freeze-after-school-turns-heating-save-planet
Posted by JS at 19:08

"Pupils at Ansford Academy in Castle Cary, Somerset, were forced to grip their pens through thick gloves and wear their coats and hats in class as temperatures dropped to 1C."

What a load of Bollox.

Unless the head also disabled the boiler's automatic frost protection (which would fire the boiler when the temp at the sensor dropped to approx +4 deg C to circulate warmed water around the ystem), AND was willing to take the risk of subsequent system freeze-up with resultant pipe-burst(s) damage, then the reported 'facts' need be taken with a pinch of salt.

I am glad to see you investigating this further - I think it deserves it. But if the radiators are switched off in a classroom, the actions of the boiler elsewhere are of little relevance. The local paper reports that temperatures were as low as 0.8C: 'The Met Office said the temperature at Yeovilton, ten miles from the school, ranged between 12.2 degrees Celsius and 0.8 degrees between 9am and 9pm last Friday.' (source: http://www.thisissomerset.co.uk/Somerset-head-teacher-defends-eco-drive-)turn/story-14069180-detail/story.html. These of course are outside temperatures, but they do indicate that it was a cold day.

Temperatures reported by the Met Office will be external temperatures. At the point of their thermometer; not necessarily at the school, and certainly not 'jut outside' that particular classroom.

Even a previously heated building with its heating then turned-off for 48 hours rarely falls below +3C to +4C in the SW UK.

This building had its heating on, but in one room, the rads were turned off. Even if that room was an external corner, single storey room, it still had 2 x internal walls having heated spaces, so those 2 x walls would act as radiators.

If it was a ground-floor room with heated rooms above, the ceiling too would also act as a radiator.

If the radiators were turned 'on the day' of the experiment I suspect it would be physically impossible for the room temp to drop to only +1C. The structure would have too much thermal inertia.

Even if the external temperature dropped to 0.8C (At what time? ) was it at that temperature the entire time the experiment took place? It is rare indeed for SW UK atmospheric temperature to be that low throughout the day.

Knowing nothing else about the finer details of the event, I fear this is simply alarmist journalism written by a hack with no knowledge of buildings' thermodynamics.

If he'd turned off the heating as an experiment to see if they could experience winter conditions as suffered by thousands of UK pensioners unable to afford fuel & energy because of exorbitant costs due to unecessary subsidies paid for "green" energy, then that would be truer.

His moral turpitude is not affected by whichever choice of political cause you care to give him. He deliberately interfered in a negative way with the schooling of children under his control in order to advance his 'cause', leding one teacher to observe 'The kids were complaining, no one was working properly some of them could not even write because they could not grip a pen through woolly gloves.
'We have a number of pupils with mental and physical disabilities here and they really struggled with the cold.
'It was unnecessary and in my opinion barbaric.'

It was indeed both unnecessary and barbaric.

On the other hand, the children *did* learn a valuable lesson: to disrespect authority and exactly what they can expect if the environmentalists get their way.

I suspect wave after wave of children subjected all their school years to climate propaganda will indeed develop a very poor view of those who pushed it at them, and of the 'system' that failed to protect them from such moral and intellectual abuse.

they will trust their betters & elders to give good/true advise, that's the way the world should work.
that's the tragedy.

It's irrelevant what the exact temperature inside the school was. When the heating fails in a school with outside temperatures similar to what they were on that day, the school would be closed. He should be sacked.

BTW - the trend in "average temperature" calculated from the Yeovilton data is 0.0023°C per year, or 0.23°C per century. Raging global warming indeed. It's facts like that the kids ought to be getting, not irresponsible "experiments".

If you put 'Exeter, England' (which is not so far from Somerset) in the temperature gizmo near the top-right of this blog, and click to get 'All' the data (about the past 40 years), you'll see a cooling trend of 5.7C per century.