Shoddy: '50 million climate refugees by 2010'  Good soundbite, great for the headlines, good for the funding.  Pity about the lack of substance.  Here is a graphic they used with that title: 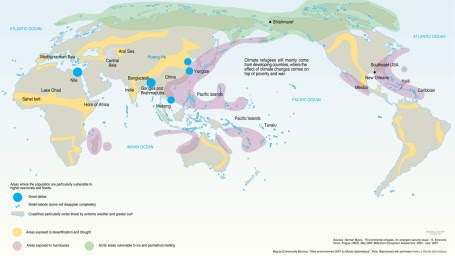 More use is made of the soundbite here, in 2008: http://www.un.org/apps/news/story.asp?NewsID=27094&Cr=refugee&Cr1
Extract: 'In a related development, the UN Environment Programme (UNEP) said in a statement today that a new kind of casualty was being created by climate change: the environmental refugee.

“Rising sea levels, increasing desertification, weather-induced flooding, and more frequent natural disasters have, and will increasingly become, a major cause of population displacement in several parts of the world,” the statement said.

Citing a report from the UN University, UNEP said that there were now more than 19 million people officially recognized as “persons of concern” – people who are likely to be displaced because of environmental disasters. UNEP said that figure is expected to grow to about 50 million by the end of 2010.'


Superficial: there was and is no substance to it, merely a highlighting of aspects of climate with a casual leap to those millions of 'climate refugees'.  Gavin Atkins spotted it, here: http://asiancorrespondent.com/52189/what-happened-to-the-climate-refugees/   Extract: 'However, a very cursory look at the first available evidence seems to show that the places identified by the UNEP as most at risk of having climate refugees are not only not losing people, they are actually among the fastest growing regions in the world.'

Sly, Sneaky: The original claim was pure spin on the part of UNEP, and now they are trying to airbrush it out of their online records.  Anthony Watts has their number, here: http://wattsupwiththat.com/2011/04/15/the-un-disappears-50-million-climate-refugees-then-botches-the-disappearing-attempt/


Supercilious: try clicking on the UNEP location of the above map and 'story', and you'll get this on part of your screen:

Seriously stupid: they have provided more straws for the camel's back of public credulity.  And they have provided an informative '10-minute trainer' for any class investigating manipulation and moral turpitude in the area of climate politics.

And, talking of straws, one to clutch in these dark days of intellectual and political oppression in climate science and policy is the fact that the wrong 'side' of this 'debate' has so many people of such low calibre.  In fact, I cannot think of any that I would class as being of high calibre.  But they have certainly been influential.


UPDATE.  WUWT has an update, explaining it was not just UNEP, but the UN itself taking us for that particular ride of ridiculousness:

'UPDATE3: Reader Andrew30 provides the linkage of this farce to the main body of the UN, not just the UNEP as some have complained.

General Assembly, 8 July 2008
GA/10725
Sixty-second General Assembly
Informal Meeting on Climate Change and Most Vulnerable Countries (AM)
Statements
SRGJAN KERIM, President of the General Assembly, opened the discussion by saying that 11 of the last 12 years had ranked among the 12 warmest since the keeping of global temperature records had begun in 1850. Two points were significant: that climate change was inherently a sustainable-development challenge; and that more efforts than ever before must be exerted to enable poor countries to prepare for impacts because it had been estimated that there would be between 50 million and 200 million environmental migrants by 2010.
Panel Discussion
The Assembly then held a panel discussion moderated by author and journalist Eugene Linden. The panellists were Reid Basher, Senior Coordinator at the Secretariat of the International Strategy for Disaster Reduction; Ian Noble, Senior Climate Change Specialist at the World Bank; and Veerle Vandeweerd, Director of the Environment and Energy Group at the United Nations Development Programme (UNDP).
Source: http://www.un.org/News/Press/docs/2008/ga10725.doc.htm'