Loaded climatology: what chance have the pupils if their teachers buy into this?

Corruption of schools by politicians and government agencies:

(1) NASA pushes alarmist projections based on woefully inadequate computer models for use by schools.  See how hot we'll be in 2060!!  A withering attack on this at C3 (http://www.c3headlines.com/2010/09/nasas-inaccurate-climate-model-technology-pushed-into-schools-classrooms-incompetence-101-or-propaga.html):

Read here . Big government bureaucrats, whose entire careers are based on incompetence and wasting billions of tax dollars, have now decided that students should learn about the government's inaccurate, non-reliable, CO2-centric computer climate models.


Are they really unreliable and inaccurate? Well, the facts do speak for themselves. As everyone knows from real world day-to-day experience, weather computer models are notoriously inaccurate for weather projections out past a few days. Seasonal forecasts by weather/climate models are even worse, to the point that experts are no longer relying on them. It has become established scientific fact that the inaccuracy of computer model's increases exponentially over time, making them entirely useless as thermometer predictors for any future period.'

(2) US Representative, Sarbannes calls for deliberate indoctrination of schoolchildren to profit from the totalitarian strategy of using children for political pressure. (see: http://www.cnsnews.com/news/article/75645   via http://icecap.us/index.php/go/political-climate  H/tip: thanks Dave)

'
(CNSNews.com) - Rep. John Sarbanes (D-Md.) told CNSNews.com at a “Sustainability Education Summit” hosted by the U.S. Education Department on Tuesday that environmental education in schools can “promote the agenda” of climate change and population growth through the influence it has on children.


“Like I keep saying over and over again, if you get young people invested in those ideas early on, that will result in those kinds of positive policy developments,” Sarbanes told CNSNews.com. “So, whether it’s climate change, whether it’s population growth, whether it’s all these factors that impact the health of our world, raising that awareness early among young people is only going to promote the agenda.”  '


(3) Here in the UK, there are websites pushing the climate dogma on to teachers, e.g. this one in Scotland  (http://www.ltscotland.org.uk/exploringclimatechange/index.asp ) where it says:

'Our climate is changing. The planet is warming faster than at any time in the last 10,000 years. Global average temperatures have risen by 0.8ºC since the late 19th century, and 0.2ºC per decade over the past 25 years. Man-made greenhouse gas emissions have caused, and continue to cause, most of the observed temperature rise since the mid 20th century. Millions of tonnes of greenhouse gases are produced every day by human activity. These constant emissions into the Earth’s atmosphere continue to drive global warming. '


Here are some things their pupils may find on the internet to infuriate any teacher taken in by the thrust of the above paragraph, i.e. that there is something unusual about recent climate, and that human activity is driving it. Here is a plot based on temperature reconstructions over the last 2000 years.  Once again, nothing unusual about the 20thC: 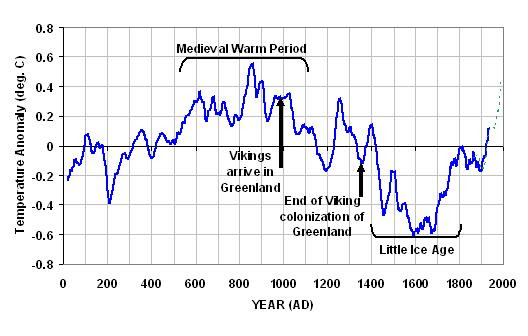 And over the past 10,000 years or so of the Holocene, this plot shows nothing unusual in our bit of this pleasantly warm interglacial, but unfortunately with an overall cooling trend for the past 6,000 years as we approach the next glaciation of our ice age: 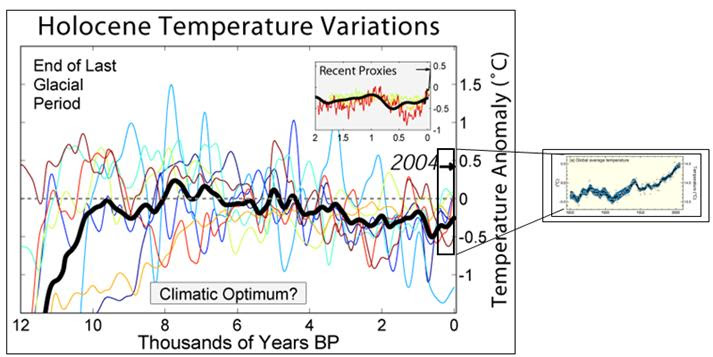 (more context and source for this plot here: http://www.appinsys.com/GlobalWarming/GW_Part1_PreHistoricalRecord.htm

(4) In Australia, the Australian Science Teachers Association endorse this insidious website with its game for 8 year-olds an up: http://www.footprintsgame.com.au/game.

'FootprintsTM is a challenging learning game for players aged 8 and over. It is specifically aimed at middle school students, encouraging them to learn more and act on saving our environment. FootprintsTM is about the greatest challenges facing humanity today... global warming and climate change.'

How will the children themselves deal with this if their teachers are overwhelmed by all this pressure and toe the line?

Depression and dismay, a hatred of technology, a horror of the future?  Cannon fodder for eco-terrorists? Or will some of them when they are old enough, make use of the internet to expose the nonsense and embarrass their teachers?

Time will tell.  Perhaps some teachers will lead the way instead.  Although in so doing,  they will put their careers at risk in our current environment.  But perhaps that is preferable to risking those of any pupils who dare challenge the disgraceful and anti-scientific orthodoxy of alarmism which is being imposed upon them.

One day, and I hope it is soon, our schools will be free to encourage both realism and optimism about our environment, and show how our technological systems have brought so much benefit - coal-fired power stations included.  There is a great deal to be pleased and excited about, but the sickening flood of ill-founded alarmism about CO2 is poisoning the minds and spirits of a generation.
Posted by JS at 18:26