The propaganda pantomime of climate alarmism in education has a cast list of many thousands, and it includes brainwashed journalists, activists of both the ruthless and the naïve varieties, wealthy aristocrats on a mission, and, last but not least, distinctly unimpressed schoolchildren on the receiving end of the nonsense.

The journalist who wrote this may well be an example of a decent person profoundly misled by the climate propaganda drive of the last 30 years of so:
‘An informal survey this spring of 800 members of the National Earth Science Teachers Association (NESTA) found that climate change was second only to evolution in triggering protests from parents and school administrators. Online message boards for science teachers tell similar tales. Unlike biology teachers defending the teaching of evolution, however, earth science teachers don't have the protection of the First Amendment's language about religion. But the teachers feel their arguments are equally compelling: Science courses should reflect the best scientific knowledge of the day, and offering opposing views amounts to teaching poor science. Most science teachers don't relish having to engage this latest threat to their profession and resent devoting precious classroom time to a discussion of an alleged "controversy." And they believe that politics has no place in a science classroom. Even so, some are being dragged against their will into a conflict they fear could turn ugly.’ (http://www.sciencemag.org/content/333/6043/688.summary)
It is very encouraging to hear of opposition in the United States to the teaching of climate alarmism in schools – let us hope that opposition meets with success sooner rather than later – but the article itself provides, unintentionally, some clue as to why this alarmism has been so readily incorporated into school curricula.
To describe discussion about climate theories as being about an ‘alleged controversy’ is surely symptomatic of deep brainwashing.  The case for alarm over CO2 has never been convincing, and the models used to support it have failed in substantial ways whenever they can be compared with the real atmosphere – so much so that even their creators regard them as unfit for forecasting.  The climate variations we have seen over the past 30 years of this deliberate propagandising are consistent with ‘business as usual’ in the climate system and have shown no indication at all of anything extraordinary happening other than the annual increases in ambient CO2 measured at Mona Loa.  Calmer minds, and ones well-qualified in the relevant sciences, have noted that a further doubling of CO2 levels such as we might see over the next 100 years, is likely to contribute an overall temperature increase in the vicinity of 1C, an amount that will be hard to distinguish from the other sources of variation in the system which have brought about, for example, the Medieval Warm Period, the Little Ice Age, and the approx. 1C per century warming since the end of it.  Furthermore, we might well hope that such warming will continue, since warmer periods have been overwhelmingly beneficial to humanity, while the cold ones have been harder on us.
Joseph Bast of the Heartland Institute has made a more detailed critique of the article in Science here:  http://news.heartland.org/newspaper-article/2011/08/10/heartland-replies-science
His Fisking identifies 3 substantial reasons why Sara Reardon, the author of the piece, ought to be ashamed of her shoddy journalism, and goes on to conclude:
‘The reason the teaching of climate change is so controversial is because environmental advocates, many of them coming from the liberal end of the political spectrum, are using the subject to advance their political agendas. The goal should be to get politics out of the classroom, not protect it by banning debate and censoring objective sources of research.’
Meanwhile, the millions continue to pour into the coffers of those who are making the most of the climate opportunity to advance their cause.  This particular grant is intended to:  '... help governments understand the fundamental social, cultural and institutional prerequisites that have to be in place to develop effective responses to dangerous environmental change.'
Here is a description of what Martin Durkin calls ‘posh-anti-capitalism’  - it seems to have affected so many wealthy aristocrats, and others, and which seems to be so widespread in the climate movement::
‘The next time you’re forced to attend a dinner party, keep an eye out for the global warmer.  Then ask him what he thinks about supermarkets (wicked), ‘consumer society’ (soulless), world trade (cruel) and government regulation (more needed).  Global warmers are, in short, anti-capitalist.  But – and here’s the really important thing to understand – it’s a very specific form of anti-capitalism.  We might call it posh anti-capitalism.
In the old days, when there was less swearing on TV and kids were scared of policemen, anti-capitalism was coloured Red.   The Reds complained that capitalism would cause the ‘immiseration’ of the workers, and they dreamed of giant socialist factories, out-producing the West.
The tragedy (for the Reds) was that capitalism didn’t play ball.  Instead of getting poorer, ordinary folk got richer – much, much richer.  For the simple reason that capitalist mass production must necessarily go hand in hand with mass consumption.  What the new-leftists call ‘consumer society’.

But these days, anti-capitalists are coloured Green.  They campaign not in the name of the working class, but of ‘Earth’.  Instead of giant factories, they dream of little handicraft workshops and organic peasant farms.  They complain not that capitalism will impoverish the workers, but, on the contrary, that capitalism has made them too rich.  It is the very success of capitalism that seems to upset them.’
Here is another example of left-wing exploitation of the young for political ends, a video showing the finished products, or are they?  I suspect they might well suspect they are being misused, and if not now, then they surely will when they look back on it as adults:
But to end on a more cheerful note, here is a recent anecdote from Damian Thompson in the Telegraph Blogs suggesting that the propaganda drive has been overdone:
‘This week, I met a 17‑year-old pupil from a girls’ public school that, in the past, has been more famous for turning out Sloaney husband-hunters than for filling its pupils with useless scientific facts. But the stereotype is out of date, it seems. The GCSE syllabus ranges far and wide, taking in the physics, chemistry, biology, geopolitics, economics and ethics of climate change. In English lessons, girls “debate” (ie, heartily endorse) the proposition that global warming will kill us all. And guess what topic has been chosen for French conversation?
But parents shouldn’t worry that their girls will turn into eco-loons. “Honestly,” says my informant, “we’re all, like, sooo bored with climate change. I can’t wait to leave school to escape.”’

Some Sanity for the Climate Classroom: a sensible cartoon on where we are 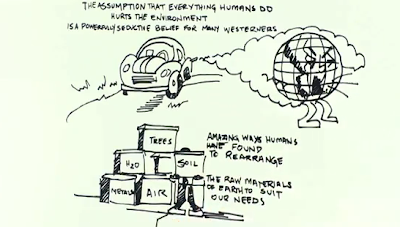 The above screenshot is from the animated cartoon which can be watched in the frame below:

'A debunking of the left's global warming agenda, from Roy W. Spencer, former NASA climatologist and climate expert. For more on this topic, purchase his new Broadside, "The Bad Science and Bad Policy of Obama's Global Warming Agenda" by clicking here: http://amzn.to/jYWzEH.'
Source: http://www.youtube.com/watch?v=vvObfrs3qoE
Posted by JS at 09:19 No comments:

Children recall what they have been taught about climate change: mostly nonsense

Passing though a Scottish village earlier this week, I bought the local newsletter.  I was, and remain, dismayed to find the above piece in amongst more worthy and more cheerful stuff about museum visits and celebrating the royal wedding.  The uncorrected English errors in this, and other pupil reports, suggest that perhaps neither teacher nor editor checked the texts before publication.  But I understand that it is not fashionable to point out such errors these days, and so I am inclined to think that the pieces were reviewed at least for factual accuracy before being submitted.  If so, the climate change report shown above is evidence that this phase of the war on children's minds may well have been won by those using CO2-alarm to gain political and financial advantages for their various causes.  The children, and their teachers, are the immediate casualties, and they have my sympathies.  But this propaganda war is not over while we still have the freedom and determination to comment, ask questions, criticise, and point out errors and misleading advice.  A lot more of such activity is clearly required.