Fatuous Forecasting Confidence re Climate - bad for us all

Our knowledge of the climate system precludes reliable forecasting of climate.  Our knowledge of climate forecasting precludes responsible adults from pushing doom-laden prophesies based on it.  Unfortunately some deeply irresponsible ones have been doing just that, and that they were trained in science adds to their disgrace in my eyes.  Schneider, Houghton, and Hansen, and a few dozen close associates have much to answer for.  Their doomsaying caught the attention of influential people who had long been intent on dismantling industrial civilisation, most notably Maurice Strong and the Club of Rome, and they dramatically made the most of through their influence on bodies such as UNEP and the IPCC.  Ostensibly investigating 'climate change', the IPCC blatantly ignored or downplayed natural causes and became instead a lobbyist for the reduction of CO2 emissions, asserted as being the primary cause of concern.  PR wheezes such as talk of 90% confidence, of 2,500 scientists taking part, of massive consensus - these all disintegrated under investigation: the '90%' is an invented, not computed, number; the participating scientists who were looking at causes of climate change were a few dozen at most; and the 'consensus' notion was added in by editors, perhaps most notoriously, Santer, choosing to completely disregard dissenting voices.  The clever wheeze of preparing summary reports for policy makers, and getting these published before the main reports of substance was also a success - they knew what would matter most was what would be read by journalists and politicians!

And what an impact they have had!  The idea that human activity is both causing serious and harmful climate change, and that we can control climate by reducing emissions, have become the established, taken-for-granted, view.  Yet neither is credible, and neither is supported by observations.  Indeed the predictions of the computer models which have provided the primary vehicle for the 'scientific' side of this alarmism, have been widely shown to be refuted by observations whenever applicable, and have even been disowned by their inventors, including within IPCC publications, as being unfit for forecasting.  The UK Met Office has tried using such models for seasonal forecasting, to such dire effect that they publicly withdrew from such an obviously verifiably absurd activity.

Here is an example taken from a website aimed at supporting teachers with useful materials and guidance on many subjects.  It happens to be in Scotland, but I suspect there are dozens, possibly hundreds, of sites very much like it around the world. 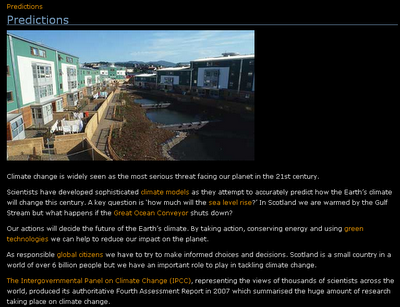 Here is the text from this screenshot:

Climate change is widely seen as the most serious threat facing our planet in the 21st century.

Scientists have developed sophisticated climate models as they attempt to accurately predict how the Earth’s climate will change this century. A key question is ‘how much will the sea level rise?’ In Scotland we are warmed by the Gulf Stream but what happens if the Great Ocean Conveyor shuts down?

Our actions will decide the future of the Earth’s climate. By taking action, conserving energy and using green technologies we can help to reduce our impact on the planet.

As responsible global citizens we have to try to make informed choices and decisions. Scotland is a small country in a world of over 6 billion people but we have an important role to play in tackling climate change.

The Intergovernmental Panel on Climate Change (IPCC), representing the views of thousands of scientists across the world, produced its authoritative Fourth Assessment Report in 2007 which summarised the huge amount of research taking place on climate change.

Let us look into this further.  First , does the IPCC make 'predictions'?

'A simple single word definition of science is the ability to predict. It is rejected by the IPCC yet they present their work as scientific. Media and the public generally believe the IPCC is making predictions and that is clearly the assumption for government policies. Members of the IPCC do nothing to dissuade the public from that view. All previous projections have been incorrect.'

Some summaries of temperature predictions/projections (not all from the alarmists) can be found here:
http://www.appinsys.com/GlobalWarming/GW_TemperatureProjections.htm

Here is one from someone not taken in by the IPCC hype:
'Don Easterbrook (geologist at Western Washington University) made predictions in 2001 as to the future global (and northern hemisphere) temperatures to the year 2100. (His web page is [http://www.ac.wwu.edu/~dbunny/index.htm dead link])  {try this one instead: http://myweb.wwu.edu/dbunny/ }

“In 2001, I put my reputation on the line and published my predictions for entering a global cooling cycle about 2007 (plus or minus 3-5 years), based on past glacial, ice core, and other data. As right now, my prediction seems to be right on target and what we would expect from the past climatic record, but the IPCC prediction is getting farther and farther off the mark. With the apparent solar cooling cycle upon us, we have a ready explanation for global warming and cooling. If the present cooling trend continues, the IPCC reports will have been the biggest farce in the history of science.” [http://www.ac.wwu.edu/~dbunny/research/global/glocool_summary.pdf dead link]  {try this one instead: https://www.globalresearch.ca/global-cooling-is-here/10783 }

More forecasts of this ill-founded ilk can be found here: http://joannenova.com.au/tag/predictions-that-went-wrong/

Including that made by the hapless Dr Viner, reported thus in the year 2000:
'According to Dr David Viner, a senior research scientist at the climatic research unit (CRU) of the University of East Anglia,within a few years winter snowfall will become “a very rare and exciting event”, “Children just aren’t going to know what snow is,” he said.'
[he was unambiguous - not a good strategy when basing your forecasts on the thin ice of computer models!]

A 2010 paper contradicts the IPCC-hyped forecasts of more hurricane activity:

A great many links here to climate predictions:

But what should we do?  We surely need to try to forecast in order to plan.  Yes, and we can use simpler methods than rigged computer models to do so.  And at all costs, we must be wary of excessive confidence and so fail to plan for the inevitable variability.  Here is one such contribution:
http://wattsupwiththat.files.wordpress.com/2010/04/orssengo3.png,
and here with more details:
http://wattsupwiththat.com/2010/04/25/predictions-of-global-mean-temperatures-ipcc-projections/

The irresponsible 'experts' who wished to scare us with the outputs of the computer models they set up to scare us, and apparently themselves will not be here to be ridiculed for their grand finale scenarios in the 22nd century.  But some of them have made the PR mistake of making more readily verifiable forecasts, or 'projections', and others, given their claim of a dominant impact of CO2, can be extrapolated backwards with some plausibility to get an idea of what we ought, on average, to be seeing now or in the near future.  Nature has not been kind to them - the Himalayan Glaciers Fiasco will take a while to fade away from vivid memory.  On top of giving them immature and excitable personalities, Mother Nature has given us a display of weather events that suggests she doesn't care very much for the alarmists and wishes to mock them at every turn.  The humour of this, a kind of Universal Gore Effect, is soured more that a little by the harm these people have caused, especially to poorer people everywhere, and the damage they are doing to the young with their scaremongering.

That resources site for teachers in Scotland would do well to think again about accepting the IPCC at its own evaluation of itself.  This is a dangerously naive view of an organisation which has already caused a great deal of harm to society, and which has played an integral part in the most astonishingly successful corruption of science we have ever seen.

Note added 5/4/19: More evidence that the alarmists are giving CO2 a role it has never displayed in the past - 'no causal link for CO2 during deglaciation':
https://notrickszone.com/2019/04/04/scientists-find-no-causal-link-between-co2-and-nh-warming-during-last-deglaciation/

Second note added 5/4/19: adding the above note somehow led to this post being republished as a new one.  I can't see how to reverse that and return it to its original date (8 or 9 years ago?).  So, here it is again!  Still reads ok, albeit a bit wordy, I think.  Sadly, some of the links no longer work - I'll highlight them above, and try to find alternatives.  I've now also changed the title of the post.  Previously it highlighted shoddy materials offered to teachers in Scottish schools on climate, but the key link for that no longer works.
Some useful links here: https://www.c3headlines.com/predictionsforecasts/

Note added 6/4/19: I think now that this post may have been in my small set of draft posts, and had not been published before because I had deemed it not yet worthy.  I currently have another 9 draft posts, and I have resolved to take more care of them in future!
Posted by JS at 11:51 No comments: Links to this post