Paging David A, the polar bears are doing OK - talk of their decline was just cheap propaganda to scare kids about climate.

The idea that polar bears are disappearing has been widely used in order to win the attention of children and scare them about their own future by claiming the polar bears are already suffering badly from 'climate change' and so in due course will they.  Even the world-class narrator of nature documentaries, David Attenborough, has been taken in, and he really ought to know better.

An open-letter has been published, ostensibly to Attenborough, but actually it could apply to any teachers who have made use of the notion that polar bears have been suffering from the effects of global warming and that it is all due to humanity.  In fact, the polar bears have been doing fine, and of course the idea that humanity is driving the climate system is a far-fetched notion that more and more people can see is so unhinged from reality that they will question the morality, as well as the intellectual integrity, of anyone who pushes it.

The letter was published today in Quadrant Online.  It is from a Dr John Happs, who is described as a science educator.  He is also president of an interesting discussion group in Western Australia - the WA Skeptics.  They set out to encourage 'a responsible view of curious and unlikely claims (including medical claims) by providing regular meetings open to all'.

His letter is quite a long one, with a great deal of well-referenced information in it to back up his conclusions:

“There is no evidence that the planet is warming dangerously. Nor is there any evidence that Arctic ice and polar bears are about to vanish. There is ample evidence to show that polar bears are not under threat.  What is under threat is scientific integrity and the public’s access to accurate scientific information. The media must shoulder some of the responsibility for the misinformation and exaggeration that has been promoted about catastrophic anthropogenic global warming and a bleak future for polar bears.”

Examples of Exploitation of Polar Bears for Propaganda
I did a quick Google for 'polar bears and climate change for kids'.  Over 6 million hits, of which the following three were but some early examples:

(1) WWF: “The effects of climate change are already being felt by local wildlife and habitats in polar regions.

For example, polar bears and Emperor penguins, at the north and south pole respectively, are already declining in number as sea ice retreats for many months of the year.”

(2) Twiggle Magazine: “Children will learn that climate change is causing ice caps to melt and makes it harder for the polar bears to find food.” 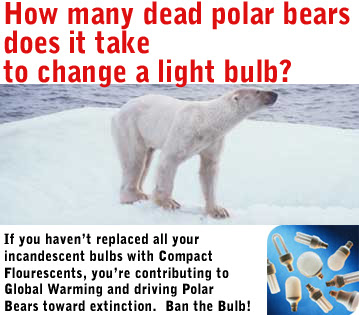 Sad to say, it is the sort of nonsense that could all too readily be found in classrooms and school materials today.

Teachers can tell their pupils that the polar bears are mostly doing OK, and far better now than a few decades ago. They can also tell them we're mostly doing OK as well, at least better than a few decades ago.  Global warming attributed to human intervention is not a threat to us, nor to the bears, nor to anything else.  If anything, we would all benefit from more global warming, not less. Somehow speculation about  largely beneficial and modest temperature rises in the 20th century has been used to demonise carbon dioxide and our industrial and agricultural progress.  So far, the rising carbon dioxide levels' only demonstrable effect on us has been to contribute to an appreciable rise in agricultural productivity on the one hand, and a hideous rise in irrational and destructive scaremongering and climate-linked policy-making on the other.

Note added 16 April 2013: Relevant thoughts and links in this Spiked article: http://www.spiked-online.com/site/article/13462/
Posted by JS at 17:46 No comments: Links to this post